The Girl in the Corner 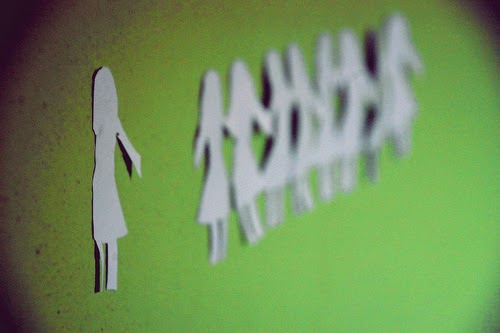 She stood in the corner of the room watching, waiting for the ballet class to finish. Nearby, a group of mothers who were all well acquainted chatted amicably among themselves. They didn't seem to notice the girl in the corner and seemed oblivious to her presence but I did. I was in the same position. I traveled from the country into the town to bring my little girls to their classical ballet class. I didn't know the other mothers and I didn't know the girl who stood in the corner. She fascinated me. She dressed conservatively and wore no make up. I wondered whether she was a member of the local group that re-enacted the Victorian heritage of the town - quite a number dressed in Victorian costume as a matter of rule. I knew I should really go over and introduce myself but with an older boy in tow and a wriggly baby on my hip who would soon need a feed, as soon as the girls had curtsied to their teacher I raced over grabbed their hands and quickly ushered them out of the hall to strap them into their car seats for the 40 minute journey home.

I regretted only smiling at and not speaking to the girl in the corner. The time was drawing near when we would be leaving our farm and moving across the Tasman. Then one week somehow she overcame her shyness and spoke to me. I knew it had been a courageous step for her as she asked quietly and politely whether my daughter would like to come over and visit. Her daughter needed a friend but I sensed that she was also asking on her own behalf and reaching out to me. I took up the invitation. She lived just around the corner and I let out a gasp when I saw her home. A stately Victorian town house with a walled garden. 'Wow, you live here?' She smiled. I had walked past it often and wondered who was fortunate enough to live in such a historic property. Now I was being given a tour of its interior. As our girls played together we chatted over a cup of tea. I told her about my life as a farmer's wife and she told me what it was like to be the custodian of such a grand old home. Caring for it took a lot of her time. I noticed the books on her shelves. Classics and the works of great men of the Christian faith such as Spurgeon and Tozer. A fellow believer, a quiet, and unassuming lady. A gentle soul. She was lovely company and how I wished I had made the effort to get to know her sooner. I saw the sadness in her eyes when I told her we were soon leaving to start a new life in Australia.

Perhaps you also know a girl in the corner. Maybe she attends your church, your playgroup or your ladies ministry meeting. She stays in the background. She sits alone or alongside the older ladies who have invited her to join them but are now engaged in conversation with their neighbour. You may even be that girl in the corner. You are ignored. You look around the room and you feel you don't fit in. I tend to think of myself as fairly outgoing but I know what it is like to be the girl in the corner. Even at church. The one place where the welcome should not be confined to a greeting at the door. On the occasions when I became the girl in the corner I can't really explain why. It's happened at gatherings both large and small. I once attended a swimming carnival run by a homeschool support group that I had not attended before. I barely knew anyone  but I had so much in common with everyone there. I never expected to be ignored, to sit in the stands and occasionally have other women look up from their conversations and stare across at me but no one came and introduced themselves. Needless to say, I never returned to that group.

On other occasions I know many of the people in the room but it seems they are all caught up in conversations with the group they are with so I sit quietly at my table and sip on my tea and wait for the meeting to begin. There is lots of talk about sisterhood but barely a mention of motherhood yet most of the women in the room are mothers or hope to be mothers one day. Why don't they teach about being a wife and a mother? What about homemaking? I once had the opportunity to speak at a large gathering for women. Just a five minute slot in a packed programme. I chose to speak on the table and why it was the most important piece of furniture in my home. I shared about family and hospitality. That was over 10 years ago but recently a woman came up to me and told me that she had never forgotten what I shared on the table.

Maybe that is why the girl in the corner has come along. She's hoping to be able to glean some wisdom from an older woman. She wants to be a better mother. She dearly wants to hear others share their experiences of everyday life in the home - the place where she knows God has called her to be. And perhaps there might be someone, who like herself is also looking for a friend, someone she can confide in. Not a small group or a Bible study held at an impractical time that she has to travel to. Just one caring person who will call in to see her from time to time. Who will have time to stay for a coffee and some conversation. The next time she ventures out to a larger gathering her new friend will look out for her, she will introduce her to others. She is no longer the girl in the corner. You see she knew all along her value and worth to God. She didn't need to hear another message on that. What she really needed to know and experience was that others valued her as her Saviour did - that they noticed her, spoke to her more than a greeting or a passing 'how are you?' as they dash past to see the friend they really want to catch up with.

Dear friends, can I encourage you to look out for the girl in the corner. Especially, when you attend church or gatherings of women or even your homeschool support meeting. Scan the room. There will be a girl in the corner. She might be a young mother or an older lady. You might say but our church has small groups. She should join one, that is where connections are made and friendships are formed and yes that is true but not every person can get along to a small group. Distance to travel could be an issue or finances. Maybe she can't afford the petrol or doesn't enjoy driving at night. I experienced a road rage incidence once on the way to a woman's ministry night. I feared for my life as the car which had been speeding came up behind me flashing his lights, sounding his horn and sitting on my bumper as I drove at the speed limit. For a long time I avoided attending meetings held at night. Perhaps the small groups are held at an inconvenient time during the day. Or maybe the groups are overly age segregated which is one of the issues I face as a woman in her 40's. Too old for most of the small groups for women and families and too young for others, leaving me with very few options. I have young adults, teenagers, young children and a pre-schooler. I have much to offer younger mothers but few opportunities to minister to them.

Be open to the prompting of the Lord. He will place people across your path or maybe across your street who need to know that someone is genuinely interested in them. Who will smile, make them feel truly welcome and take the time to talk to them and invite them to come and sit with them. It may lead to a sweet friendship, an opportunity to minister or it may be the only time you meet them but they won't forget you because they no longer felt alone or awkward in the situation they found themselves in. I will continue to look out for the girl in the corner and I hope you will too.

Posted by Ann at eightacresofeden at 1:27 PM 9 comments