A Degree and Debt Free 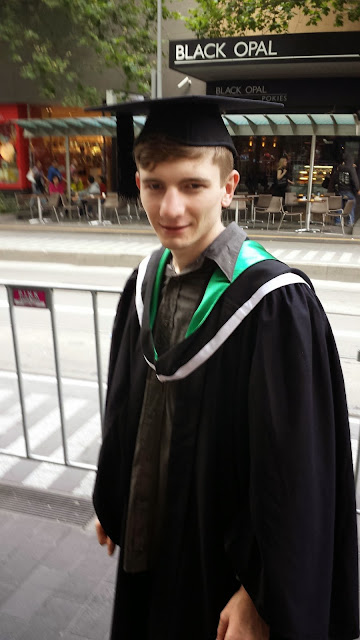 2013 came to a very exciting and fulfilling close after we traveled to Melbourne to attend our son's graduation ceremony for RMIT University. He gained a Bachelor of Technology (Computer Studies) and graduated with distinction. Those who have followed my blog over the past few years may remember his homeschool story. I am a strong believer in delight directed learning and allowed our son to concentrate on a subject throughout the high school years which he enjoyed which was computer programming. He began teaching himself to program at age 12 and at 16 he enrolled in a unit at RMIT University via Open Universities Australia (OUA). When his friends were sitting the HSC at 18 our son was partway through his University degree. His part time farm job provided income for the initial units and at 18 he set up his own web design business from home. I gave up trying to explain to people who kept asking when he was sitting the HSC. Blank stares ensued when I said he was already undertaking a degree. Now I am being asked what he is going to do now he has a degree! He is not unemployed. He has a successful business and we pray that it will continue to flourish.

We are so proud of his achievements and the fact that he was able to graduate debt free. As more design work came in, he enrolled in more units. The flexibility of the OUA programme made this possible. He studied at home and he worked from home. Exams were sat at an office in the city. Some days he would have an exam in the morning followed by a business meeting with a client! The years of hard work paid off and what a delight it was to take our first trip to Melbourne -  which is now on my list of favourite cities for lots of reasons.

Students who study externally via OUA earn exactly the same degree as those attending the bricks and mortar institution. During our stay our son met up with some of the other OUA graduates putting faces to names of people he had met and befriended on online study forums. On graduation day students from RMIT marched down the street from the University to Federation Square. In the evening the graduation ceremony took place at Docklands Stadium. I had no idea how big RMIT was or how many students would be graduating. In a sea of thousands of cap and gowns, families watched on from the stands above as their sons and daughters waited for that moment when their name was announced and they could step onto their respective stages and receive their degrees. Large screens set up around the stadium meant we were able to see in much more detail this very special moment. I had to pinch myself a few times... it was really happening!

Academic achievements aside... what delights my soul more is knowing that my son continues to walk with the Lord. That his convictions concerning God's Word and the truth it contains are strong and steadfast. That he honours God with his life... how much more important it is to be qualified for Heaven through faith in Jesus! 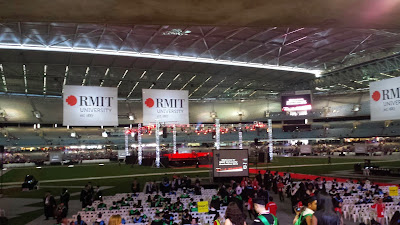 We made the most of our stay in Melbourne. We walked for miles until we sussed out the trams (why are there no large signs explaining they are cashless and you need a card!) and I found the best little vintage shop in the universe where I bought my first chandelier. A real chandelier from the 1940's made of glass and not plastic unlike some modern reproductions  it's for our vintage hire business but hangs outside under the verandah where it is easy to access and admire. Our trip home was eventful. A day of crazy heat that our van could not handle. It was 45 degrees (that's 113 f for my overseas friends!) as we drove through inner Sydney and the decision was made to stop for the night somewhere on the way home which meant we got to visit quite a few country cities and towns. I did most of my Christmas shopping in these towns and found Vinnies (a thrift store) that had vintage china at reasonable prices. Now that is quite something these days!

We were home for Christmas ... a quiet and intimate Christmas this year and an opportunity to relax and enjoy my favourite time of the year with my favourite people - my family.

2014 has already commenced . I pray that it will be a year of many blessings for you all. That God will reveal Himself to you more and more ...His ways, His plans, His paths. I hope I find more time to blog but no promises are being made. I hope that sharing some more of our homeschool journey has been an encouragement to someone ... maybe someone who is just starting out or a mom who is constantly being asked 'How is he going to get to university if he doesn't go to school?'. We have been there and know what that is like! The Lord goes with you wherever you go. He is with you every step of the way...so relax in that knowledge and enjoy the learning journey with the precious ones He has entrusted to you. Persevere dear homeschool friends.... you will not regret your decision.

Posted by Ann at eightacresofeden at 12:17 PM 8 comments