A Romantic Find in a Vintage Tin 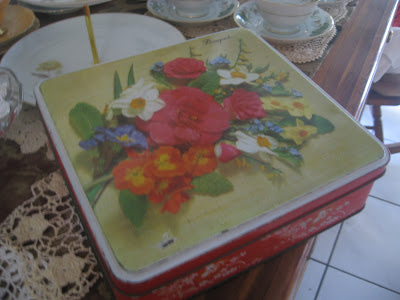 It was the pretty flowers on this vintage biscuit tin that drew my eye. I was at one of the estate/garage sales I have been frequenting of late in my search for old china for my cake stand business. It was the princely sum of just two dollars. I picked it up, it was heavy. What could be inside? I opened it up to discover.... 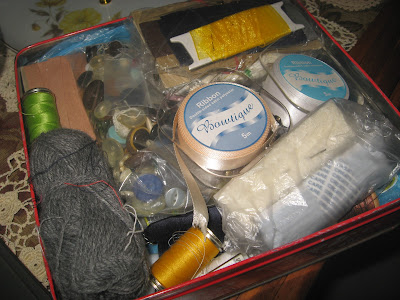 Sewing supplies! Needles and thread. Buttons and reels of satin ribbon. This had been an old lady's sewing box! I paid the asking price and popped it into the little wicker picnic basket I had also purchased at the same garage sale together with a cross stitched linen tablecloth. The grand total for these finds was $6! I was still a little disappointed that I had not found any china plates or cups at the sale but these items had made it worth my visit. On my return home I popped the tin away and did not look through its contents until the other day. Little did I know that this tin was holding one of the most beautiful things I have ever found at a garage sale. 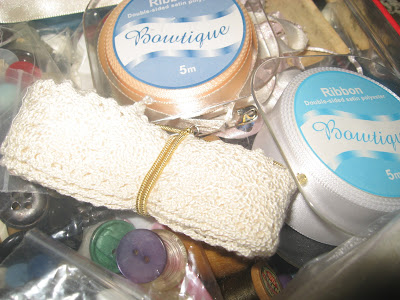 I rummaged through its contents and was rather pleased to find ribbon and cream crocheted trim. Then something caught my eye - tucked away under the books of needles was a folded up sheet of lined paper, yellow with age. I thought it might be a receipt for sewing supplies. I opened it up. It was a letter and the date was March 3rd 1945. Close to the end of the war in Europe and five months before the official end of the war in the Pacific - had this letter been sent by a serviceman to his sweetheart back home? I'm guessing it did for this note had accompanied a gift which he wanted her to have as a token.

'Diane Dear,
This Daily Light Book was mine but I would like you to accept it as a token from me.
I hope you will find it as inspirational as I have found it, and to sit beside you one day and read together from it would be a joy which would fill my whole being.
Love Lloyd.' 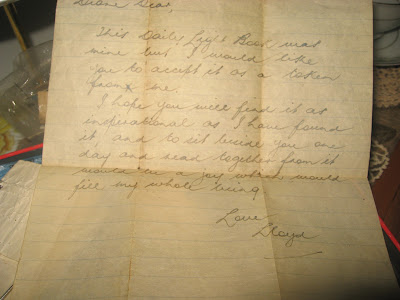 Wow! I had a lump in my throat as I read those words.They are probably the most romantic words I have ever read. He wanted her to have something that was very precious to him - a devotional which is a Christian classic, a book of daily Scripture readings based entirely on the Bible. I was familiar with 'Daily Light on the Path' from my childhood and decided to read up on its background. You might be familiar with it too but did you know that it started life as a family devotional published by a man named Robert Bagster in the 1870's who had been brought up in a devout Christian family where morning and evening Scripture readings carefully complied by his father Jonathon Bagster were the foundation of family life. Jonathon Bagster was passing on the baton of a Godly heritage - he too had been raised by parents who had wanted to pass on a love and deep reverence for God's Word. His father Samuel Bagster was a bookseller who chose only to sell books which had 'enduring Christian value' as one commentary put it.


I wonder if the Bagster family realized just how many future generations would discover 'Daily Light' and use it as their devotional for their Christian walk. That it would be carried by people onto the mission field and bring hope and comfort to some about to face their darkest hour in concentration camps - the testimonies about how it affected lives and brought 'words in season' are so touching and now I can add another from a man who was somewhere in the world, most likely serving his country, away from the girl who obviously held a special place in his heart. Were they already married? Or did he hope to marry her on his return? Did he even return? One little note has me asking so many questions! 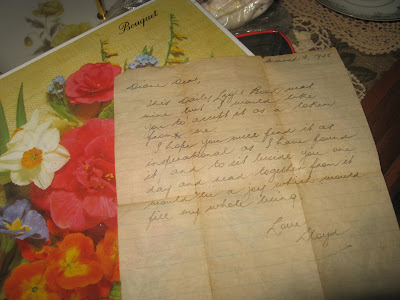 One thing is evident and it is this - the words from Scripture in this little book uplifted him and his greatest desire was to one day read them together with Diane for it would bring for him 'joy that would fill his whole being'! Oh my, how I like to think that this did actually happen and if they were a couple or became a couple - what a foundation for a marriage.

Finding this note in the pretty tin of sewing supplies has reignited a desire in my own heart to make family devotions habitual. We have not been very consistent in this, especially in the evenings. I needed a plan and a devotional that would work for all the ages in this family and I think I just found one. I'm going to purchase a copy of Daily Light probably in the King James Version as I think I would like to read the version that so inspired Lloyd the writer of the note. If you are using or have used Daily Light as your family devotional let me know your thoughts on it.

I'm also considering doing some detective work because I want to know 'how the story ended.' A little tricky as it was an estate sale but I do know a lady who lives in the street where the sale was held. Perhaps she might know more about the lady who owned the sewing tin. If I ever find out I will let you know!

Posted by Ann at eightacresofeden at 1:58 PM

How intriguing Ann!! What a lovely find!! Yes, please do let us know what you may uncover. :)

As for the family devotional times...they are so precious! It is a bit challenging with so many different ages in the circle, but so worthwhile!! Over the years, we have done something for the *littles* and then included them in the *older* things as well. Our favourite devotional book of all time is "Morning and Evening" by C.H. Spurgeon. It is so full of great encouragement and wisdom! For the younger ones (although, perhaps a little frightening at times for the VERY young) is "Little Pilgrim's Progress" by Helen Taylor. We have loved this book over the years. Of course, Scripture is read and discussed as well. :) May the LORD bless you as you embark on this wonderful journey with HIM!

Oh how fun~ what a wonderful find!
I so enjoyed reading your sweet post.

What a wonderful and providential find! The note in itself inspires us to seek the Lord and devote our marriages to Him. I do hope you find out a little more. This is very sweet and memorable.

Hi Ann
Oh my ~ what a great find & I'd love to know the rest of the story!! I haven't heard of the 'daily light', but it sounds great! We just read the Bible for family devotions & talk about it. At the moment we are in Deuteronomy & it is pretty heavy going at times, but we have wonderful discussions. I hope you can get the book & it brings about lots of delving into God's word & many discussions. Thank you for sharing & enjoy your box of treasures!
Blessings
Renata:)

Wow what a fantastic find. It's things like this that keep me on the garage sale trail :)

Wow, I hope you find out the rest if the story.

That is such a beautiful story! What a lovely letter and legacy to leave! I'm new to your blog and I find it absolutely beautiful and inspiring. It's nice that you are in Australia too! I really want to go to more garage sales now!
Thanks for sharing, especially about the devotional book, I might look at investing in it to read with my family.
Blessings to you and yours
Elisha