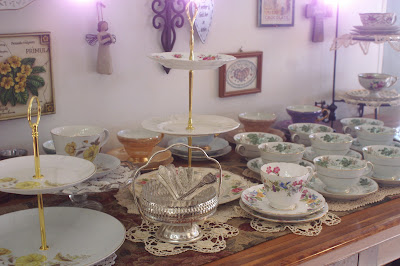 Winter 2012 was the season when my house turned into a tearoom and if you follow my blog you will know why. I haven't had much time to actually sit down and take tea or write interesting posts and regular updates for my blog.  My camera stopped working so I am relying on photos from my archives and borrowing the cameras that belong to other family members. If only I could find batteries for them! So this post is a compilation of pictures and happenings at eight acres of eden. The year my house turned into a tearoom. 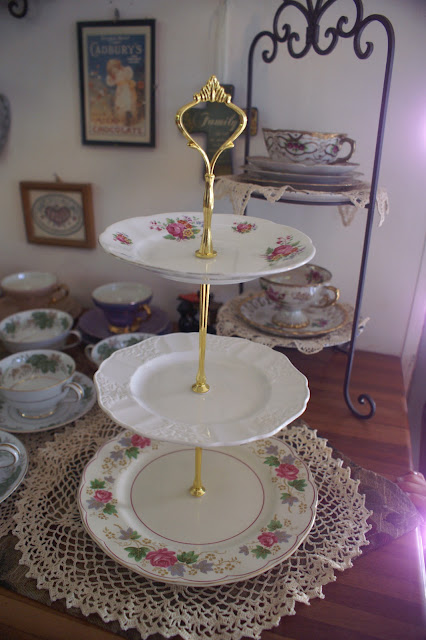 I have been making more cake stands for my market stall which going by the interest it has generated has the potential to turn into a successful little business. I now have my very own drill press. It's huge and heavy but it's made the job of drilling plates so much easier! I just love that I now have an excuse to buy pretty vintage china but letting it go is rather hard. We are now considering offering a hire service for people wanting to host high teas. I like this idea - I get to keep the china I find and loan it out to grace the tables at special occasions. It's my daughter's 15TH birthday next week and we are busy planning a dinner party, Cake stands are going to feature on the table of course! 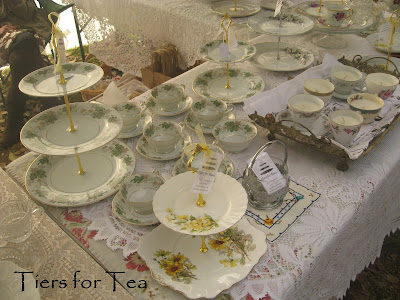 This was my most recent stall at the markets. I have two markets next month and two the following month. I have had requests from people to attend other markets and craft fairs further afield but I'm staying with my local area ones for now. I don't want this business to take me out of the home too much. 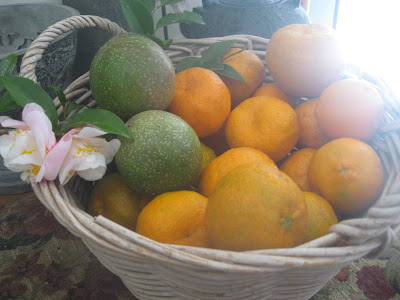 It's citrus season and once again our mandarin tree kept us amply supplied with vitamin C. The last of the mandarins were harvested a few weeks ago. I had been refusing to buy any other fruit until every last mandarin had been consumed. We now have passionfruit in abundance. I did make a few jars of jam but most days the fruit that is picked off the vine is sliced open and scooped out by children. This explains the mystery of the disappearing teaspoons. Had to hide my silver ones! 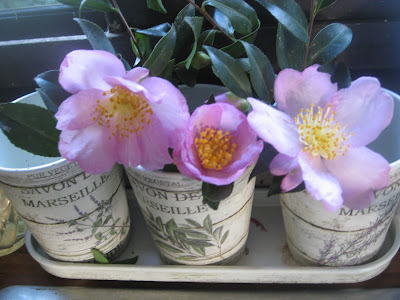 Every day at least one child picks me a camellia. I'm running out of containers for them - maybe I should use some of those teacups! 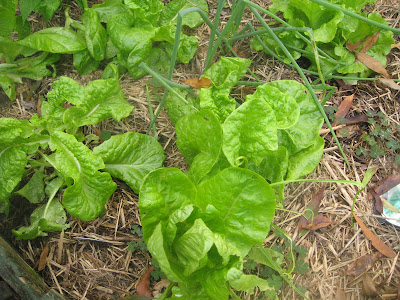 This photo was taken last winter but this year our veggie garden decided to turn into a salad garden. I have been picking leaves every day - lettuce, Asian greens and Tuscan Kale have all thrived over winter. Cabbages and spinach are doing well too. Broad beans are about to flower and the garlic planted earlier this year is looking like it might give us a good crop come summer. We also discovered an accidental pumpkin patch growing in the compost . To harvest the dozen pumpkins it produced, required an expedition into the wild which practically required one to abseil as the vines scrambled down the hill. I thought of recruiting Bear Grylls but sent down my son and the twins who thought it was a great adventure searching for pumpkins in the undergrowth. We had pumpkin soup, pumpkin bread, pumpkin scones, roast pumpkin and I made what I thought was an ample supply of pumpkin chutney. The children and my husband loved it and we even used it on homemade pizzas. It didn't last as long as I hoped. 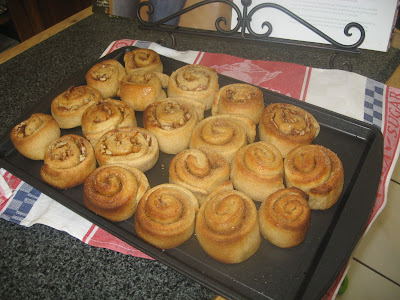 I have been making these almost every day. Some day they are the sweet version - cinnamon buns and other days I leave out the sugar and cinnamon and fill them with roast peppers and feta. The savoury scrolls last about 10 minutes and the cinnamon ones are gone in 60 seconds! 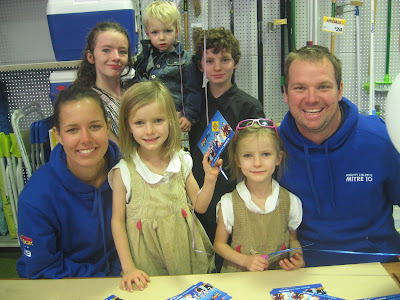 And yes we do leave the house. It's usually to go to garage sales, op shops, the ice rink, church, tennis lessons and one place we frequent is hardware stores seeing we have been renovating this house like forever. But on this occasion we were actually at  a wedding and when the bride and groom went away for photos we took a trip to a shopping centre and who just happened to be in the hardware store there but Brad and Lara from the television renovation programme 'The Block'. They were the nicest couple, very down to earth and when my daughter let go of her balloon and it went up to the ceiling Lara climbed up onto the table and rescued it for her. We were thrilled when they went on to win the competition but all suggestions from the family that mum and dad should apply to go on this show have been met with a resounding 'No Way'! The only thing I intend on drilling is plates! 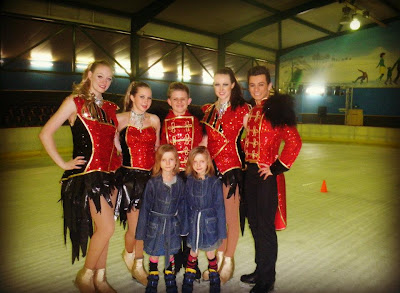 And to finish off this post one more exciting event this winter was the opportunity to attend an ice skating show called 'Fantastique on Ice'. Seeing most of the children have been skating for quite a number of years we decided to splash out and buy tickets to see this show. I had my daughter 'find a friend' and we qualified for a group booking which brought down the cost considerably. One of the bonuses on this occasion of being a large family. If only other venues would allow big families to be classed as a group. After the show was over, the ice was opened up for a skating session and the twins were on there before anyone else as they knew their boot size. They got to meet the performers some of whom are Australian champions. It was all very exciting for them and this pretty much guarantees that skating will continue to be a passion for my children for years to come. The youngest member of the family gets to give it a go next year when he turns 3 which is how old the twins were when they started.

Hope you have enjoyed visiting the 'tea rooms'. This was meant to be a point by point post but I can't help describing things! And it's great to have all these memories recorded here. I will be able to look back one day and say ' So that was the year my house turned into a tea room!

Posted by Ann at eightacresofeden at 5:04 PM

Looks like a wonderful winter, Ann.
I absolutely love your beautiful china. You are so talented. I was so hoping Brad & Lara would win, they seemed the most normal & down to earth. Our oranges this year were like dessert, they were so sweet & unbelievably tasty. You forget what real fruit & veggies taste like until you grow your own. Amazing. Hope your family is all well & didn't go down to the winter colds. All of mine did, but not too bad. I loved visiting your "tearooms", Love Niki x

Looks like you have been busy! I have never heard of pumpkin chutney before! I find all homemade preserves go really quickly here!

I am so happy for you that your little business has turned so successful ,and is so much fun to boot! I am going to be hosting a high tea to raise money for habitat for humanity in September, so will be pulling out all my pretty plates. There might be someone in your area doing that that would like to rent your plates.

I constantly have to *get over* the fact that while we have summer, you have winter! It's a strange concept. How wonderful to still have produce even in winter...that just does not happen here!! Your own mandarines from your own trees...love it! :)

Yippee for your business doing so well...good for you Ann!

Have a wonderful weekend!
Love,
Camille

Dearest Ann
Thank you for your lovely comment today!
It's great to catch up with your news - I'm so happy your business is booming. Can you please send me an email at: pollardshane6@gmail.com just to tell me where you are, as we could be visiting Oz sometime soon and I would love to catch you at the market!!!
I'm feeling very sad, but I know each day will get easier.
What did you think of my darling Jessie - she's now 6 months old!!!
I love all the news about your family - you're a legend, with the amount that you do!
hugs
Shane xox

Hi ANN, Joolz put me onto your wonderfull blog...What a great liitle bussiness you have going there...I have lots of plates with the holes already in them and I am after the stand, can you help me? I wouldn't be game to drill holes onto my plates I would be sure to break them...Now I'm of to read more of your blog, Blessings...Mandy

Hi Mandy,
I buy my cake stand fittings on ebay. Most are for a standard 6mm hole - some of the really old cake stands have smaller holes so you should measure the hole first. If you send me an email I can let you know the name of the seller I use. She is very reliable and has everything you need - lots of different styles too.