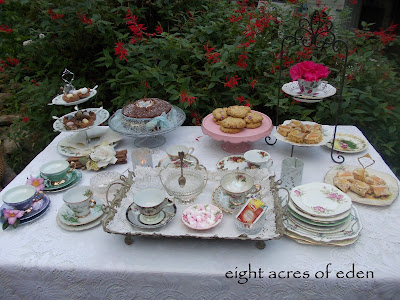 Easter heralds the beginning of show season in Australia when families flock to the showgrounds in towns and cities across the nation. In New Zealand we knew them as  'A and P' shows, it was all about the agriculture and the produce and we have attended a few in our time, though having been raised on a farm, I have to say, seeing cows and chickens at the show was really not that exciting for our children. But as our family grew in size, the cost of attending such shows became unaffordable. You have to pay for admission first, then factor in the cost of rides, sideshows and other attractions. Astronomical might be the right adjective to use here. We carefully consider our purchases and have never parted with money for plastic showbags filled with lollies and novelty toys which will soon be lost or discarded. The food stalls also made us reconsider a day at the show - greasy food at inflated prices was not what we wanted to feed our family. But even without the fast food and showbags, the cost of attending was still beyond what we were prepared to pay. 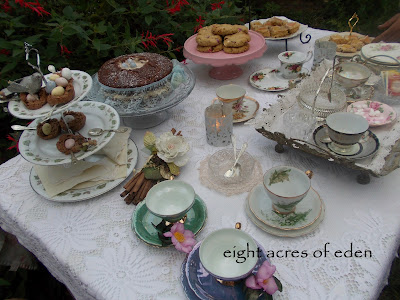 So what do you do when you have decided to not attend the show but still want to give your children the opportunity to participate in a bake-off?  It's simple - you hold your own and at Easter this year that's exactly what we did. We had four official entrants in our family bake-off to be held at a most lovely venue - our own garden. No travel involved, no waiting in traffic or struggles to find a car park space. No restrictive rules on what you could bake or its dimensions. It just had to be edible and ready to be set out on the table for afternoon tea. 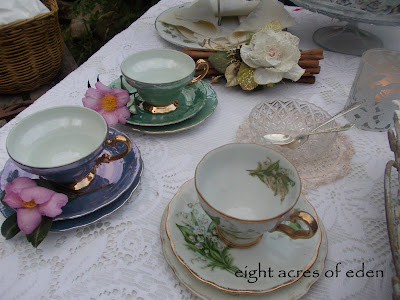 I set the table out in front of a garden bed with a profusion of pineapple sage for a backdrop. I used my lace cloths and  favourite china cups. Our newly created cake stands (see my last post) were ready to receive the cakes, biscuits and slices that were being created in the kitchen which was a hive of industry. A few squabbles over oven space and wooden spoons had to be sorted out. Some had elected to make family favourites to woo the judges. Others were checking out pinterest and searching the internet for new recipes. 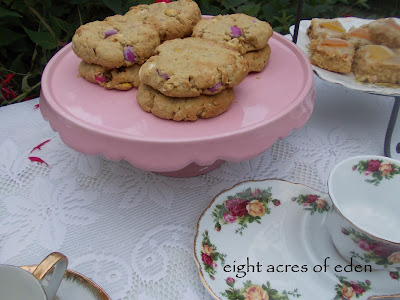 Which is always a risk. These cookies look awesome but they were not a hit with the judges I'm afraid. I think my daughter chose them for the name 'cowgirl cookies' being a cowgirl herself. But they did not compare with her own chocolate chip cookies that she sells at the markets. Do you like my Royal Albert 'tennis set' as they are known? I found it for $3 at a garage sale during one of my china hunting expeditions! 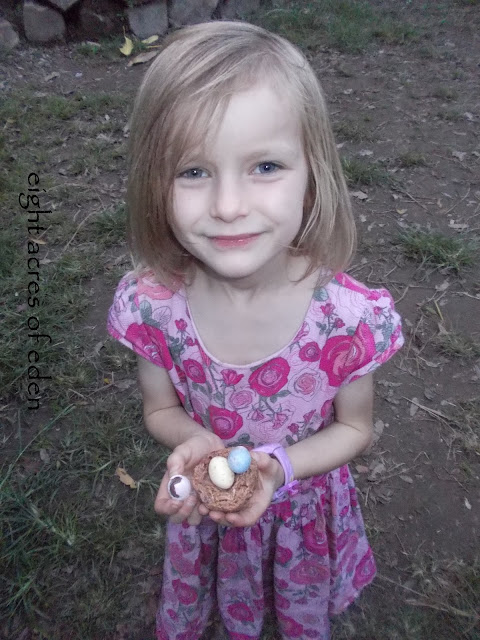 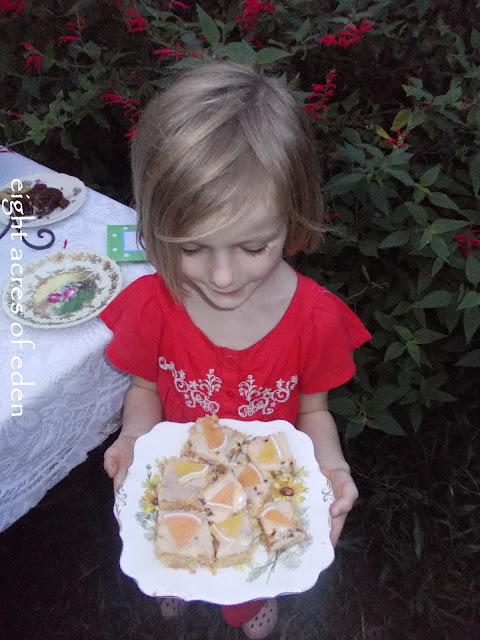 As it was Easter one of the twins decided to make chocolate nests. They looked good and the judges agreed they tasted good even with shredded wheat as an ingredient. The other twin wanted to use what was in season and passion fruit picked fresh from the vine went into her passion fruit slice, topped with a lemon or orange jelly slice, they looked and tasted delicous. But would it win over the judges? After all the delightful daughter had chosen to make a  favourite family recipe - chocolate cake! 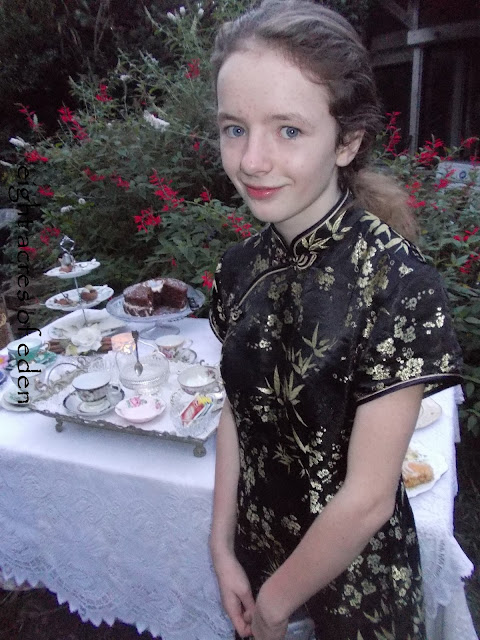 She tried to impress the judges by dressing up for the competition but it won her no favours, after all they did not know who had baked the various items. They had to taste each of the items and mark them out of 5 on presentation and more importantly taste. The points were added up and the winner was declared. 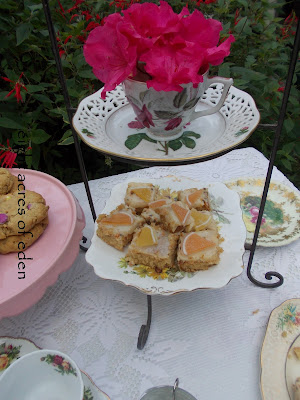 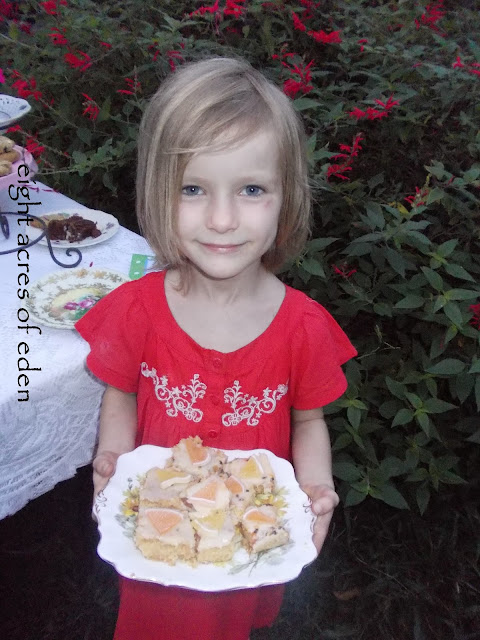 It was the passion fruit slice! The judges know what makes good afternoon tea fare. They have been testing cakes, biscuits and slices for years and are used to giving constructive criticism. This slice had just the right crumb. It wasn't too lemony or overly sweet, even with passionfruit being the star ingredient. It had been perfectly mixed by the winning cook who because of her tender age had been allowed to receive some verbal instructions but was not given any physical help. This had been agreed upon prior to the start of the bake-off. Let's just say the older girls in the family were not allowed to forget that they lost out to their younger twin sisters, for it was the twins who claimed both first and second places. There could only be one winner though and she was presented with a pretty Kath Kidston envelope that held a crisp five dollar note. A lot more prize money was on offer here than at the local show! Needless to say she was beside herself with excitement!

The recipe for passion fruit slice features in our family recipe journal. It is so easy to make. Our passion fruit vine is dripping with fruit so it will be making an appearance at more afternoon teas this autumn and winter. If you have passion fruit do give it a try. Here's the recipe as it appears in our journal. 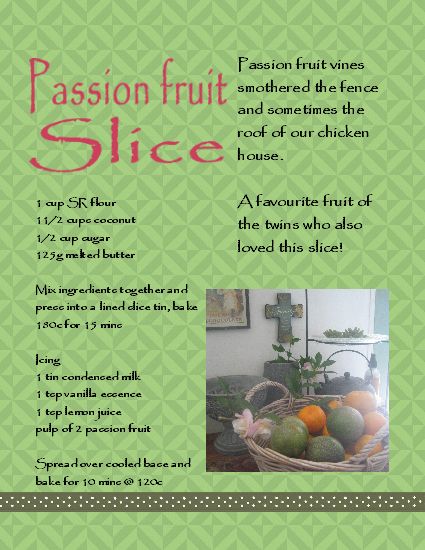 I think our fabulous family bake-off might become a family tradition and an annual event at this time of the year. I know two girls who are already talking about what they are planning to make for the next competition. And one girl does not intend on giving up her title! With the success of this years bake-off  I'm thinking of maybe having little trophies and certificates for next year. 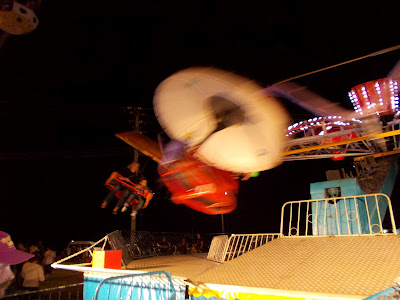 Have you ever held a family bake -off? Or found an affordable and fun alternative if the show is also not within your family budget? We do attend the free fireworks display on New Year's Eve where the carnival does not have an admission charge and each child is given a budget and can choose to go on one or two rides so they don't grow up being deprived of the thrill of going on the dodgems, whizzing down the bumper slide or riding the ferris wheel. But some of the best times as a family have been in our own backyard that were either free or did not cost a lot of money and these are the times I hope my children will always look back on and remember as the best times of all!

Posted by Ann at eightacresofeden at 4:07 PM

That's such a lovely idea, well done for providing your family with such wonderful family memories.

What a beautiful idea and new tradition!! I love this.
--
There are a lot of things our family skips for many of the reasons you listed. We do make a lot of fun memories together at home though and I think they will be remembered after the usual plastic trinkets are long gone.

Plenty of people comment negatively on how we live, but in the long run I believe our children will be better off for it. Besides, I am not accountable to the people in town for my child, I am accountable to God. :)

Hi Ann,
Something we did as part of our home school curriculum was to do international feasts, we would study the country, and then go and borrow appropriate cook books from the library. Each child would then choose at least one dish to cook and we would have a feast.

My girls got discouraged baking desserts for the markets too, but found that decorated cupcakes, coconut ice, and nougat were big sellers. I continued their tradition if I had somebody to help me, as I sell my handmade soap. But as my helpers left home or were otherwise employed I stopped the baking as I couldn't handle soap and cakes together. I still get customers coming especially to buy coconut ice or nougat and they are always disappointed.So I would encourage your daughter to persevere and find a couple of good sellers, it can take a while to get known and build up a customer base.

I love your tiered plates and would really appreciate if you would be able to share how you drilled the plates and where you purchased the screw bits to make the stands. I would love to use these on my stall, and we are in the process of beginning a farm shop where they may be something extra to sell. Please don't worry I am not trying to take your market as I live in Victoria, if I was closer I wouldn't even dream of asking. Louisa

Hi Ann
I know I owe you an email & I'm sorry I haven't sent one yet, but I thought I'd catch up here what I've missed. I love the idea of a family bake~ off. I was thinking that it would be a few years until my kids were old enough, but then went on to see that it was your younger children who did the baking! Mine would love it!!!
Thanks for the passion fruit slice recipe. I'm sure we would enjoy it & I have some passionfruit here that my sister brought down with her when she visited.
Hope you are going well & have a wonderful week
Blessings
Renata:)

never had a family bake off, but I'm inspired too now!


These are lovely photos...I can almost taste the homade goodness!

I love this idea Ann! And I've so enjoyed popping in tonight and catching up on your blog. Your children have all grown so much!
Much love, Saminda.

So much fun! What a great idea! Congrats to the winner!! :)