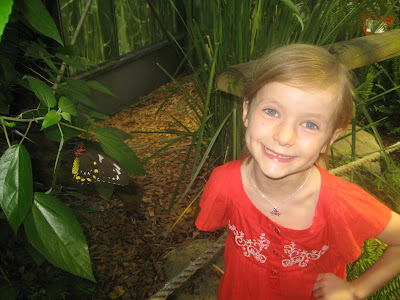 I recently surprised my twin girls on their 6TH birthday with a visit to a Butterfly House, a local tourist attraction that all of my older children have already visited. On the morning of their birthday they were just giddy with excitement and had absolutely no idea of what mum had planned for their birthday. They were told to go and get ready and to put on their new red dresses and be ready to go for a drive. 'A drive?' The anticipation was building and they kept on guessing all the way. 'Mac Donalds?' one girl called out. 'Come on, mum can do better than that!' I responded, their big sister laughing as she chauffeured us to our destination, taking advantage of another opportunity to bump up her hours of driving needed to obtain her licence. 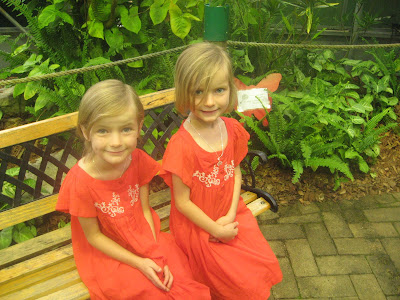 My girls bright and beautiful in their red Zara dresses which really suit them.
Their other gift was a silver crown pendant to remind them that they are daughters of the King!


When we arrived at the Butterfly House the girls were still puzzled - why was mum bringing them to a park to play in the rain? Then one astute observer spotted the butterfly logo on the sign 'Butterflies!' she exclaimed. She had guessed right! When we arrived at the reception the girls told the lady it was their birthday and at that very word all the staff burst into a boisterous rendition of 'Happy Birthday'. It made the twins feel very special!

Here are some of the photos I managed to snap inside. I love to share with you pictures of the colourful wildlife that visits Eight Acres of Eden and we do have butterflies but not all these varieties of Australian butterflies! I hope I have the right species for each picture. 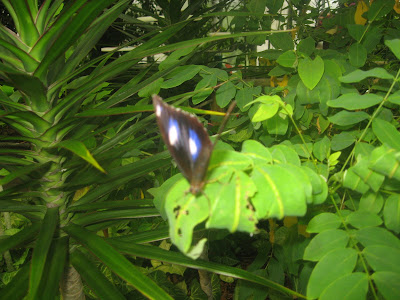 This is the 'Varied Eggfly'. This is the male with its bright blue markings. The female has orange blotches. 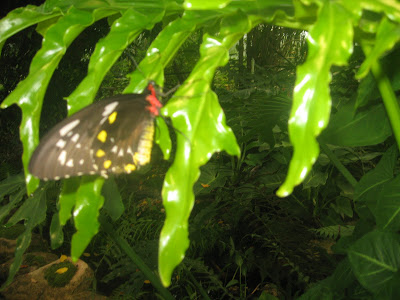 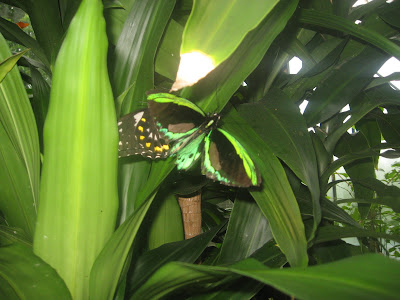 Is not as spectacular as the male Cairns Birdwing with its vivid green wings! 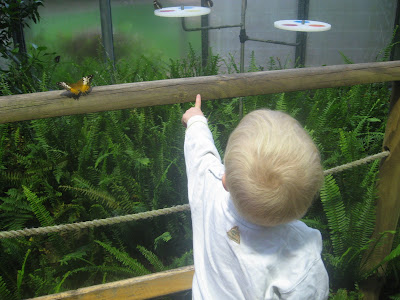 Their little brother also came along and he was just as excited to see all the bright butterflies fluttering around, some landing on posts or even on your head if you stood still for long enough! There were some 'hands on' attractions too, such as this rather large stick insect. My girls are used to all kinds of critters and had no reservation in allowing a staff member to place this guy onto their hand! 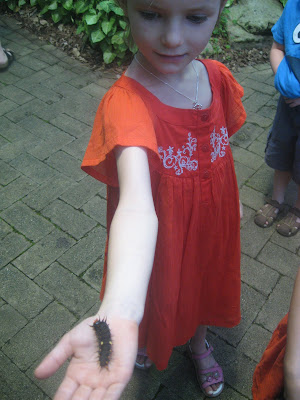 'Want to hold a spiky caterpillar?' Her eyes lit up! No problem! 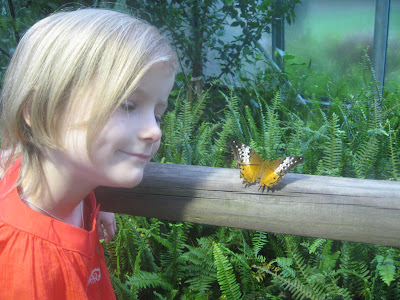 Another opportunity for an up close and personal viewing! 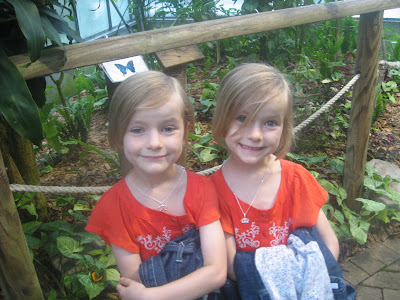 Time to go! They did not believe me when I told them they might need to put on their jackets to go outside. It was cozy and warm inside the temperature controlled butterfly house but a little chilly outside with drizzling rain still coming down. It has been a cool start to our summer. Would you believe me if I told you I was wearing a jumper today? I was very relieved I had not planned a picnic at the beach for the twins' birthday!

I hope you enjoyed seeing the pictures of our butterfly birthday trip. Have you ever surprised your children on their birthday with a visit to somewhere special? For them alone and not the whole family? The admission costs for attractions can be so expensive for a large family so this is one way in which we have been able to keep costs down. It is easier for me now as I have older children who can look after the younger ones if need be. They have all been before so were not too disappointed at 'missing out' on the birthday surprise and of course we all shared in the celebration of the girl's birthday later that evening with a special ice cream cake for dessert. Sorry no pictures this time but they are on my daughter's camera and I have run out of time.

I pray your Christmas preparations are going well. I hope to share mine with you soon - just two more parties to plan before the best celebration of all, it truly is the birthday season!

Posted by Ann at eightacresofeden at 1:32 PM

such a lovely surprise for your daughters Ann!

What a lovely day for your twins. It has been cold- I have moved back into my winter PJ"s the last two nights!

What a lovley surprise for your precious daughters , and i love the thought behind there birthday gift ( the pendent ) how lovley :-)

Ann they look like they were so happy! What a great Bday surprise! And such a great attraction to have nearby.
I have one wedding and one more Bday to go before Christmas...Phew! As Mum this year is Tired!
Hugs and kisses to your two lil angels,They look beautiful,happy and so pretty in red!

Happy Birthday to your girls Ann! What a fun surprise you planned!
Yes, it's been a cold summer so far ~ I've been wearing jumpers often as well!
I hope you have a wonderful rest of December with all your birthdays & Christmas
Blessings
Renata:)

I was wondering if you finally decided on a butterfly birthday. It sounds delightful... Would love to have joined you. I miss those kinds of field trips. I miss having the kids small enough to go with me (I know its supposed to be for them, but they make it enjoyable for us don't they?) Happy Birthday to your two little "Cupcakes". They are so cute; what treasures they are. I look forward to seeing your Christmas decorating.
I have enjoyed little glimpses on pinterest; I am enjoying pinterest very much by the way. It has been a little bit of fun and rest for me these last few weeks.
Much Love,
Pam

What a special outing to see thoses beautiful butterflies, the girls looked like they and a wonderful time.

How wonderful Ann! What a fun thing to take your birthday children on their own special outing! They sure looked as though they had a great time! Isn't God's Handiwork amazing??

Many CHRISTmas blessings to you and your family. May the LORD bless you all this CHRISTmas and throughout the coming year.

Oh my Christmas stars~ I so loved seeing your adorable children.

I have not been able to read blogs in forever. My mom is doing better and my sister has had a cancer scare. Today we learned it is benign~ Praise God. I am resting easy now but so far behind!

It was good catching up with you my Friend!