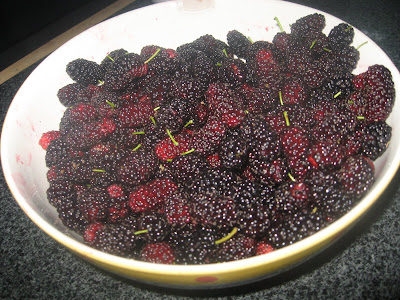 The black weeping mulberry tree is laden with fruit this spring - even after the birds have raided the tree there have been more than enough berries to pick. Plenty for eating fresh from the tree and for making jam. I have made two batches so far and would love to show you how I made my jam.

I enlisted the help of several willing volunteers (my younger children) who were more than happy to pick (and eat) berries. Pays to wear old clothes when you are picking mulberries! We filled up a big bowl with approximately one kilo of berries. This is just from one visit to the tree - plenty remain, still to ripen. I usually make jam in small batches - one kilo at a time. This is more likely to ensure that your jam sets, especially as mulberries are not naturally high in pectin - this is why I also included some not quite ripe berries in the batch I was making into jam.

A handy tip I found was to also pick a few green berries. Squish them between your fingers and rub over those inevitable purple stains - hey, guess what? Green mulberries can remove the stain of ripe mulberries from hands and fingers. Try it - it works!

I did not remove the stalks - 1. Because it would take forever 2. Stain my fingers even more and 3. I did a little research and found out that mulberries are high in anti-oxidants and the stalks contain the most resveratol, a phytonutrient that studies suggest may provide a number of health benefits including a cardioprotective action.

All the berries (1 kilo) went straight into the pot and were gently simmered in their own juices until tender. I then added 1 kilo of raw sugar and 2 large apples that had been lightly stewed in a small amount of water with a squeeze of fresh lemon juice in a separate pan. 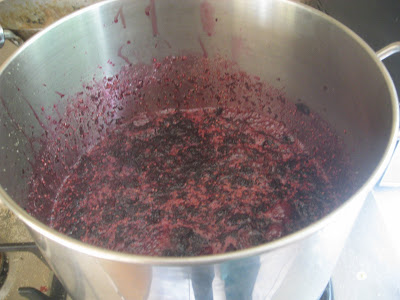 Brought to a rapid boil - the jam bubbled and reduced down and I began to test for setting by placing a spoonful onto a cold saucer and gently pulling back the surface. Even though the jam seemed a little too runny for my liking, a slight crinkle was appearing after just 12 minutes. I poured the jam into the hot sterilized jars and sealed them. It set just fine without the need for commercial pectin. But do not be dismayed if your jam does not set - call it dessert sauce and spoon it over ice cream or pancakes! You can't go wrong. In fact the next batch of jam I make is not going to be allowed to set as I would like to have some sauce in the pantry too! 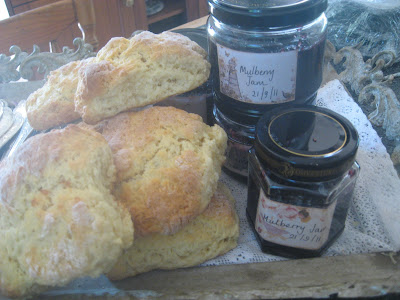 The first jar was opened later to serve on homemade scones with cream of course. Four out of the seven original jars (I used slightly bigger preserving jars for my second batch) remain and will come out at breakfast time - just a little sliver is all that is needed on a slice of crusty sourdough toast. 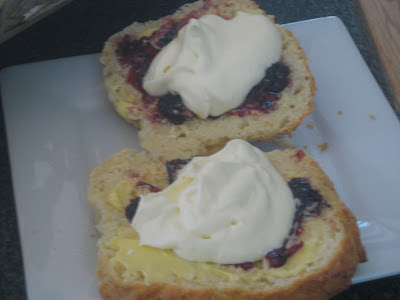 I have been using Gary Mehigan's (Masterchef Australia) recipe for scones since I discovered it as it involves no rubbing in of butter - anything that saves me time in the kitchen I'm happy to try and this is a great scone. I sometimes add walnuts and dates, occasionally white chocolate and berries but as there were whole berries in the jam this batch was just plain sweet scones - whipped up in next to no time. They disappeared in next to no time too! 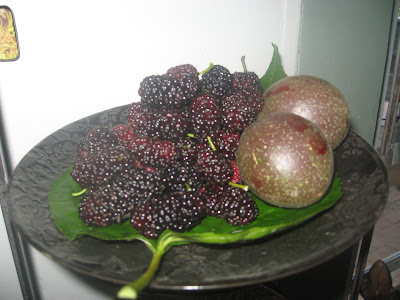 We still have the odd passion fruit coming in from the vine that covers the fence of our chicken run and orchard. Not enough for turning into jam as most are sliced open and consumed by my children who love them. They occasionally remember to bring me a few to use for passion fruit icing! What fruit are you harvesting at the moment? What are your favourite preserves?

Posted by Ann at eightacresofeden at 2:19 PM

Email ThisBlogThis!Share to TwitterShare to FacebookShare to Pinterest
Labels: In the kitchen

I love mulberries, I am hoping to convince my hubby to let us have a bush or 2, he is for some reason not keen on them.

I love mulberries ~ I have fun memories of picking & eating mulberries as a child (& getting stuck up the mulberry tree too :) )
I have just planted a mulberry tree here ~ at the moment it is only 40 cm or so high, but it is getting a nice covering of leaves. I pray that we will one day get a lovely crop of fruit from it.
Enjoy your jam ~ I'll have to go looking for that scone recipe ~ I don't have a nice one, however Dave is a fantastic scone maker!!
Blessings
Renata:)

Yummmmmm....I could bathe in Mulberries I just love them! I may come out looking abit purple though!

It's funny I read your post tonight as I plan to make jam tomorrow. I've never made jam before so this is my first go so I'm hoping it works.

I put equal amounts of mulberries and sugar in a put with the same amount of water e.g. 1 cup berries, 1 sugar, 1 water and boil until the berries are soft and are braking down. Strain into a bowl with a fine strainer pushing as much of the pulp through as you can. Check for taste, you can always reheat and add more sugar if you don't feel its sweet enough and bottle. Great over ice cream or with soda water as a cordial.

Oh my! This reminds me of the first place my husband and I started our life together. It was in farm country and it had multiple mulberry trees up and down the road from our street. And we were the only house there! Now I have more knowledge and canning equipment than I did as a young married lady. My sister in law have mulberries AND black raspberries on their property. I've promised pie and jam if they let us pick some.