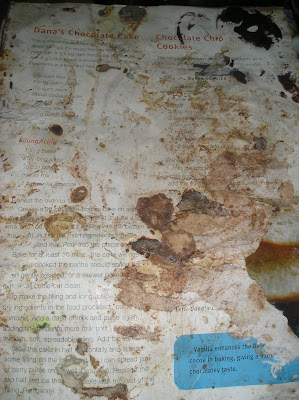 As promised, I'm going to share the link to a website that features a recipe for a chocolate cake that is reportedly, one of the most frequently made recipes in New Zealand which is where it originated. I do admit to being biased but my favourite recipes are by New Zealanders and my favourite cooks Jo Seager and Annabel Langbein both have recipes for excellent chocolate cakes but they don't quite match this cake! It is 'Dana's chocolate cake' but I have no idea who Dana is! Perhaps someone can enlighten me. It was featured in Sophie Gray's first volume 'The Destitute Gourmet - Stunning Food from Small Change' a book I purchased when I lived in New Zealand over ten years ago. It is the most used recipe in this house, apart from my own fruit and nut sourdough loaf, and the proof is in the batter splattered page - surely a sign of a good recipe! This photograph was taken for nostalgic purposes some time ago but last week it finally disintegrated - that's okay, there are several handwritten copies to be found around my house - all written out for purposes of penmanship and first cooking lessons. My sixteen year old daughter has made it so many times she has now memorized it! 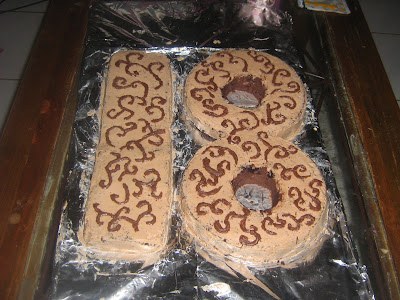 It is the chocolate cake that is made for all birthday cakes including the one for the homeschool graduate when he celebrated his eighteenth birthday last year. Actually, he was the recipient of a number of versions as we needed several cakes for all the guests to ensure that no one missed out! It just seems like yesterday he was offering chocolate cake to the man who came to review our home education programme. My son was nine years old and insisted on making a chocolate cake for the review officer. As the man was returning his papers to his briefcase, my son emerged from the kitchen proudly carrying the cake which was smothered in chocolate icing. 'Would you like a piece of Dana's chocolate cake?' he politely asked the man. 'No thank you, I'm watching my cholesterol' he replied. The look of disappointment on my son's face was evident but he wasn't giving up 'Did you know there is good cholesterol and bad cholesterol?' The man smiled as my son, much to my mortification, started to outline the differences - perhaps in a vain attempt to convince him that this cake might contain good cholesterol and he would be convinced to try a slice! No, we had not been studying nutrition - it seems as I discovered later, that my son had absorbed quite a number of facts from a segment about cholesterol on a current affairs programme! I can remember thinking - this guy is going to be wondering who Dana is and does this amount to bribery? Well he missed out but most visitors to our home do not refuse chocolate cake and indeed, this is the recipe I am asked for time and time again. 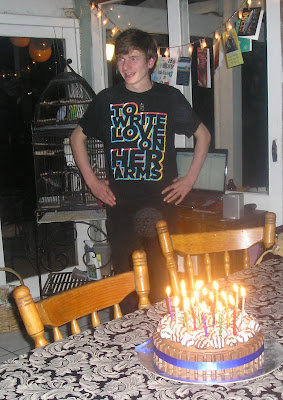 My daughter also made and decorated this cake for her big brother. She has had plenty of practice - her little brother in the picture below (not my youngest but wow - the resemblance at the same age!) is now eleven years old and still likes to lick the bowl! 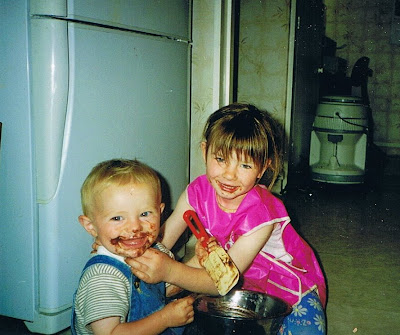 Which incidentally, was just yesterday as yet another Dana's chocolate cake came out of the oven, courtesy of my five year old twin daughters who made it for me on Mother's Day - the first recipe they have made with just verbal instructions and minimal supervision. They were very proud of their efforts and as it always does, it turned out perfectly. It is so easy to make - throw all the ingredients into the bowl or food processor and mix well. Pour into your prepared tin and bake. 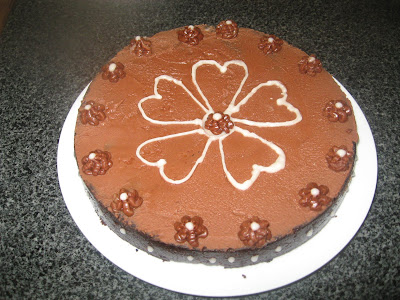 I am now going to send you on a recipe hunt as I am sticking to my policy of not reproducing recipes at my blog unless they are my own. If you do a search for 'Dana's chocolate cake' I can guarantee you will find the recipe - at forums and on blogs (not all acknowledge the source either) but I am sending you to the site of the Destitute Gourmet. You will need to register to access recipes but it is worth it as you also receive a newsletter by email packed with lots of tips for saving money in the kitchen. I just wish they would feature a link to this recipe on the main page - I finally found it after several site searches, in the Spring newsletter for 2009 under 'Dana's chocolate cupcakes' - the recipe can also be used to make cupcakes. Perhaps if the recipe was made more accessible it would become the most baked chocolate cake in the world! Believe me it is worth searching for!

What is your most frequently made recipe - the one you make time and time again? I will not be surprised if it is a sweet recipe or to find that it features chocolate!

Posted by Ann at eightacresofeden at 11:54 AM

Email ThisBlogThis!Share to TwitterShare to FacebookShare to Pinterest
Labels: In the kitchen, Nostalgia

Never heard of this cake before. As I need to make a cake for morning tea soon, I might give this one a go.

My most made cake is a passionfruit cake, the family love it and everyone I make it for also love it. It's very moist. It comes from a school created cookbook from many years ago.

Thanks for the link, I found the recipe and copied it, so I am all set to go. I liked the comment on the recipe page, about it always being the most worn and dirtiest page in the cookbook.
I just went straight to search and it didn't make me register.

Thank you for the name of it Ann and all the fun stories about your experiences with this cake. I'll have to give it a try sometime. :)

Hi Ann. :) I smiled when I saw your recipe page - I have several like that! My Christmas Cake recipe is looking very well loved, as is a chocolate cake recipe, a coconut muffin recipe that I use all the time, and my recipe for Tuna Mornay. xo

Greetings from Amish country everyone, and nice blog by the way. Richard from Lebanon county's Amish community.

Well now, I can't resist hunting this down. The stories behind each time it is baked make it even more special. The one your daughter decorated looks lovely. What is around the sides of it? Is it chocolate bars? I do really think that food is a definite part of all of our happy memories, and what fun that it is.
Many Blessings,
Pam

We have a chocolate cake recipe & the page looks quite similar - it's from Lady Flo's recipe book - her simple chocolate cake - it always turns out & is so easy!
Thanks for sharing - I'll have to check out the link later
Have fun
Renata:)