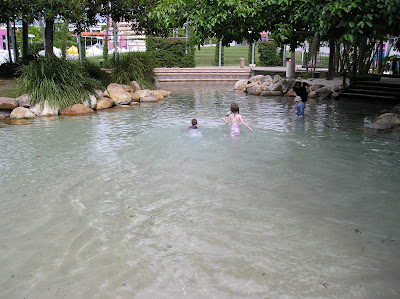 'When water was the city's friend.'
My children playing in the pools on the banks of the river during a trip to Brisbane.
This is what they loved most about Brisbane - its river.


You have seen the images on your television screens, pictures that have now been broadcast across the world. Just a few short years ago, the images of devastation were of fire ravaged communities and towns in the state of Victoria. I do not need to share any more pictures from news media websites and it is hard to find the right words to say but sometimes when spoken words cannot express the depth of emotions -

The poet's hand is moved. This poem is dedicated to all those who have been affected in some way by the disasters of recent years in this country.

The perpetrators used nature as an accomplice
And I suspect
Stood back in triumph
As the fires ignited
Nature was more than obliging
And the fires journeyed
Sending sparks ahead
With their traveling companions
Smoke, billowing, choking, blinding and
Heat so intense

Too much of a good thing (water is life but not on this day)
The torrent of waters chose its path
Without discernment - a city on a hill
And gave no notice to its inhabitants
As it continued on its furious journey
To settlements and communities
And in the city of its destination the rain kept falling
Awaiting its arrival - the unwelcome visitor
Brown and murky, meddling, malicious

And so they were taken
Homes lovingly built, restored
Occupied by families
Farms and livelihoods destroyed
Towns taken
Beautiful people taken
Babies and children taken
Mothers and fathers
Husbands and wives together until the end
Young and old
Weak and strong
Taken

Some will leave and bid farewell
We will respect their choice
But most will stay
Rebuild their homes, their towns, their lives
We will understand
This is their land Australia

Posted by Ann at eightacresofeden at 3:27 PM

Email ThisBlogThis!Share to TwitterShare to FacebookShare to Pinterest
Labels: Poems for People

I have tears streaming down my face.
This is why I am proud to be an Aussie.
Thank you Ann, a great friend, although we have never met.

Too sad for words. I ache for them and I'm at the other end of the world. Your hearts must be heavy. But we must pray for them, and encourage them..... No words... x

What a beautiful poem Ann. We have seen a little of the devastation on the BBC news here we get in the states. Of course our news is now saturated with a senseless killing spree--what is the world coming to?!

Ann~
I have been watching and praying. They are calling it "Australia's Katrina" My thoughts and prayers are with you and your country.I hope you are still doing well on your little hill.
I know how your heart is breaking for your beautiful country.
I am praying the rain has stopped.
Carrie~

I have heard only a little of the flooding in Australia but only because I have not watched tv, listened to the radio or been online. However, my daughter Becca has just shown me a news report with footage of mothers and children being swept away and I immediately thought of you and your dear family...with tears streaming down my face.
While I can not fathom the loss these families are suffering, I am so deeply grateful that you and your family are safe.
It just makes me want to hold my family tighter and thank God for them. We'll be praying for you and your country.
Blessings, Beth

What a magnificent poem. Brings a lump to my throat, esp. when I've heard stories like the 13-year-old boy...what a tragedy. And yet, what survival. What resilience God has given us. Praise the Lord. You are in my prayers.

Dear Ann ~ These poems are lovely. So sad to learn of the tragedies that led to them being written. May the LORD indeed keep you all safe and may HE give you wisdom as you minister to others at this time.

Sending you love from Cananda!
In Him,
Camille

Come on over Ann, its "award" time at my blog. I don't know if you "do" awards, but I'd loooove to hear 7 random facts about a very capable, talented, loving Mum of 7.

We all would.
Niki

Ann, the poem is beautifully written. I did not know about the flooding; I am so saddened to hear of such a tragic time for your country, but I am so glad you all are well.

I will be praying. xoxo