I had another post almost ready to publish but wanted to inform my readers from overseas about the flood disaster that is unfolding in South Queensland. The scenes on our television news this morning are hard to comprehend. I do not live in this state but our region has received lots of rainfall in recent weeks. A flood warning is in place for our local river and it is highly likely that our town will be isolated later today. My property is on a hill and apart from being cut off from town, we are high and dry and unaffected when the valley floods. This photograph was taken further down our road on the flats during the last big flood a few years ago. That is my border collie in the water. The people in the little cottage were evacuated during that event. To give you some perspective of how much worse the floods in Queensland are you may want to watch the news clip that follows. The death toll is eight but expected to rise and reports state that 72 are missing.

Your prayers are needed and appreciated for my country at this time. 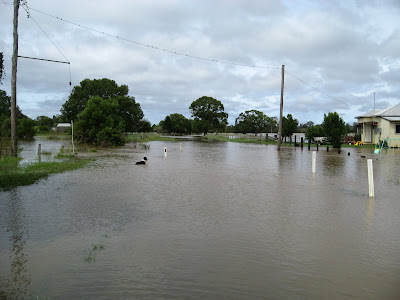 Eight dead in Queensland flash floods: "Flash flooding in the Toowoomba area has killed at least eight people and left many stranded on rooftops. //
Information hotline for frien..."

Posted by Ann at eightacresofeden at 11:40 AM

I'm so worried, Ann. Our little town is in devastation, I have family and friends in Toowoomba.... and now Brisbane is going under. :( I feel so helpless.

Praying for you Saminda - just sent you an email.

This has been a tragic and amazing day after many weeks of flooding. What has happened in the south of the state makes us thankful for our slow rising/ slow falling flood. Devastating. May God have mercy on us!

I can't believe how widespread this devastation has been. I've been watching the news closely & can't believe how much destruction has been caused by water. Dave grew up in Toowoomba & he has family up there & we are just praying & hoping they are fine. We have friends in the Lockyer Valley & I hope they are fine - I hate being so far away from eveyone. I know my sister is in an area that is currently being evacuated - she's at work at the hospital, I can't imagine what they would have to do if they had to evacuate all the patients.
All we can do is pray & I hope you are safe & well & have plenty of supplies in case you are cut off - do you keep extra just in case?
Keep safe & dry
Renata:)

Renata - I am praying for your family in these regions. It is hard to believe what is unfolding isn't it? The Brisbane river breaking its banks, 32 suburbs across the city on high flood alert. 8000 properties at possible risk. The city centre being evacuated. All this happening since we posted on our blogs about Toowoomba's crisis.
Our bridge into town went under last night apparently. One end of our road will be cut off. It always goes under. It has stopped raining here so I expect my husband will be able to get home tonight. My son has just headed off to milk the cows - they moved stock this morning to higher ground. We have food in the pantry but I'm going to get my husband to stop in at the supermarket on his way home tonight to pick up a few more groceries. I need a bigger pantry that is for sure. If we had to take neighbours in I would not have enough supplies. Not sure if that system is going to reach us as it heads south. North of us is looks like it will have major flooding.

My Brother has been seperated from his partner and 5 kids as the bridge to their town has washed away....All okay at this stage but news keeps getting worse and who'd have thought after Black Saturday we'd now face rain as a Enemy

I am so sorry for the horrible floods you are all having...

You have such a wonderful blog, family and life! I LOVE the picture of your Christmas Stove! So warm and welcoming! You are truly blessed.

I just read about the tsunami. I'm glad you're home is safe, and I'm so very sorry for everyone suffering through this! You and your country are in my prayers.

I am praying for you and your country. Keep safe! I am glad you live up on that hill!

How awful .... as I type, I am listening to Radio 4's news, and this is the story on right now. What devastation, and we are remembering them.
Love, Anne x
PS - loving your blog.
Hi Renata, and Hi Carrie (it's funny bumping into 'friends' on other people's blogs ;)

So sorry that your country is facing this disaster Ann! May the LORD indeed be glorified in it all and may many turn to HIM at this dreadful time. We will be praying for you all with our family this evening at devotions.