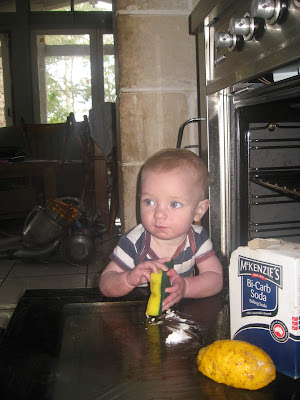 We start training them young in this household! The first time that he pulled himself up just happened to be the day when I was cleaning my oven! So it was reassuring to know that I was using non-toxic natural cleaners - bicarbonate of soda and lemon juice. We have an abundance of lemons at the moment - more than enough to use for both cooking and cleaning. Don't you just love such versatile fruit. It took me longer than expected to clean the oven. My little man just loves to be around and to help - he was not giving up the sponge scourer! When I said 'Clean for mum' he obliged by rubbing the door furiously with the sponge dipping it into the bicarb that had been sprinkled on the surface. He understands how this process works! At nine months old! 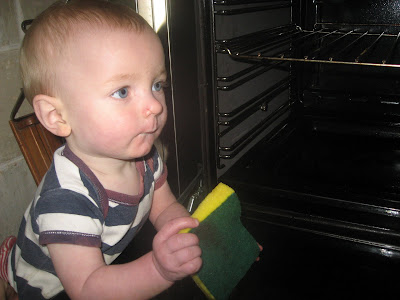 I am also delighted to report that he is talking - saying his first words. Actually he has been saying 'mom' - that is his pronunciation, ( he's been reading too many American blogs!) for quite some time. I am mum to my other children but happy to be called 'mom' by my boy! Much to his father's consternation 'mom' was his first word. I had to wait until I had seven children to hear 'mom' as the first word - all my others said 'dad' first. Of course he said 'dad' next and has since added 'up', his brother's name and 'bye' to accompany his waves. He has started waving at people on the street. I think he is going to be as outgoing as his sisters who love to befriend people. 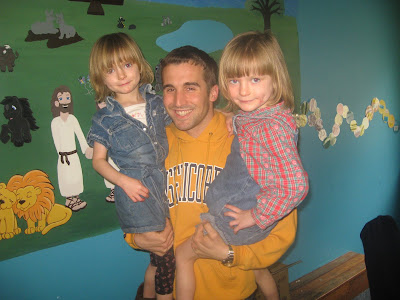 They met this young man in the buffet line at a 21st birthday party that we attended on the weekend. How delighted they were to see him at church the following morning. He was visiting from Sydney but comes from Pennsylvania, USA! 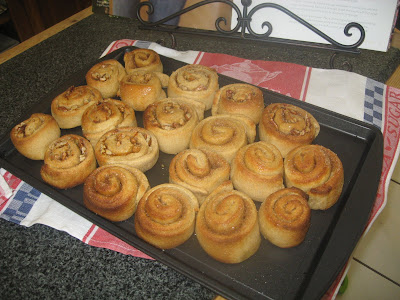 Back to the oven! - it really needed cleaning, it has been getting quite a workout lately as I've been testing recipes from my new cook book! The first recipe was for sticky buns. My oh my! I feel a little bit like Julie from the movie 'Julie and Julia.' I can report the buns were fabulous. The family thought they were too, for they were all gone by lunchtime. I think my review could be quite favourable. I have a blog, all I need now is a pearl necklace or in the case of this particular cook, a pearl bracelet! Actually I have a pearl bracelet, faux they may be but I love them!

Also need an excuse to use up all the eggs that the new chickens have been producing. It has been raining quiches and cakes for a couple of weeks now! 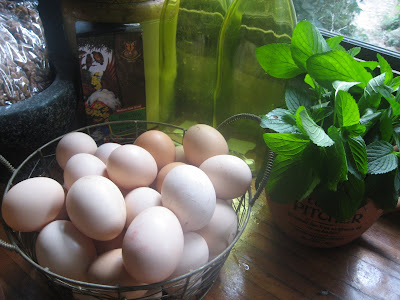 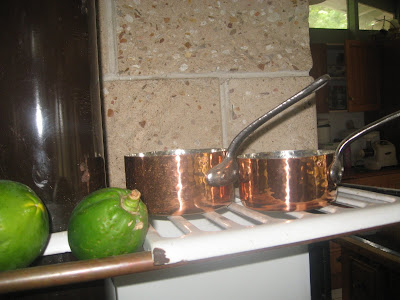 Just waiting for the last paw paw (papaya) to ripen. There are more on the tree but it has been paw paw with and in everything for weeks now so we are ready for a break. Do you like my copper pans? They are part of a set of five. I love them so much. They were a surprise gift from my husband. 'But I did not order anything from France' I told the clerk as I picked up the mysterious parcel at the post office. Imagine my surprise and delight when I opened up the 'parcel from Provence'. Shrieks of joy and 'No way!' were heard resonating through the house. It wasn't even my birthday! 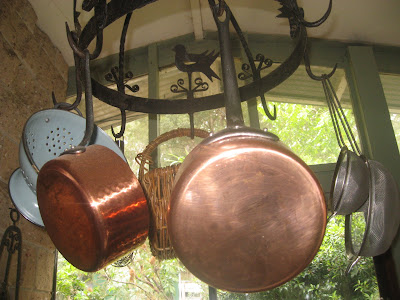 Pots, pans, produce and a clean oven which is beckoning me into the kitchen. I've just realized my computer has not automatically adjusted for daylight saving and it is 5pm not 4pm. It is going to be fast food at home tonight - maybe stir fry or pasta. This was meant to be a short update on my little man but I could not resist sharing some more photos of the people and place that I love called family and home. There is no place I would rather be!

Postscript/Question
I have started experiencing problems with the 'blogthis' button on Picasa that I use to upload my first four photographs for posts. It appeared to work yesterday but was telling me that the task could not be completed but the post was ready with all the photos there until today - the four photos uploaded via this button had disappeared leaving only those I had uploaded individually. Anyone else had the same issues recently? If you see any gaps in my posts where it seems a photo should be could you let me know. It would be interesting to know if this is affecting all browsers. I have just uploaded the missing photos. If you see duplicates you will know why!

Posted by Ann at eightacresofeden at 3:38 PM

Email ThisBlogThis!Share to TwitterShare to FacebookShare to Pinterest
Labels: Family life, In the kitchen

Clever hubby you have!! Love the pots - they look gorgeous :o)

I love cleaning with lemon too:-) And don't fret lots of Americans are Mum or Mummy....LOL! All my children call me Mum.

Great to hear you have such a industrious little Man.
He is a early one to be chatting....My Son too was saying lots early.
Do you know I have never tried Paw paw!

Wow what great pictures! Your kitchen looks so warm and inviting!

I can't believe how much the baby has grown!
So cute!

Hi Ann
Oh your little boy is just adorable! I love that he was helping you clean!
I love paw paw & miss it. We used to have trees when we lived in Qld (as well as banana trees - sigh - they are no where near as good from the shops).
We have eggs everywhere as well - in fact that reminds me I need to collect todays lot - I already have them all over the bench as the egg basket is full.
We are going on holidays for a few weeks, so I will catch up with your news on my return!
God bless
Renata:)

loved your blog and yes I saw one gap.What a sweet hubby you have.My hubby hasn't surprised me in years....I think I'm ready! It's just so sweet when they've thought of you without any prompting! Your buns look delicious, your little helper darling and that oven wow! You mothers amaze me!

Hi Ann! How precious your little man is already helping you clean! He's a cutie. :) I *love* to clean with Baking Soda too...does a great job!

Funny that he calls you Mom...I am "Mum" too...we have British roots. I think it's cute that he has adopted an American way of saying it though.

Your cinnamon buns looked lovely! I'm sure your family was pleased! I am hoping to make something of the sort soon too...yummy!!

As for the photos...all looks like it's in the right place to me...nothing seems to be missing.

Hi Ann, how adorable is your little man. They grow so quickly, don't they. He looks alot like your twin girls, does anyone else see that. Same little faces, gorgeous. I love love love your nurturing vibe, you have got it down pat. I love coming to visit.
Love to you & youre, Niki

Noticed your lovely gleaming copper pots - how do you clean them? Do you know that you can clean copper with wood ash and water - just wet the cloth, dip it in wood ash, rub the item and hey, presto! the tarnish / grime is removed :-)

Also, if you have any silverware - pop some used aluminium foil on a bowl, pour over boiling water, put your silverware on the foil, add some bicarb and - then sit back and watch the tarnish disappear.

I have other hints and tips on: http://ecofootprintsa.blogspot.com/p/trying-to-make-difference-start-of-our.html