Countdown to a Christmas Baby! 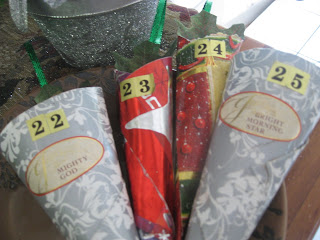 There are four more days to go to Christmas and during Advent, each morning my younger children have delighted in taking turns to place one of these handmade cones constructed from recycled Christmas cards on our patchwork Christmas tree Advent calendar. (I did not make it - bought it in a garage sale for $2!) Of course there is a little wrapped gift tucked inside - some jelly babies and chocolate coins and on certain days, extra little surprises such as colourful erasers, pens and hair ties. 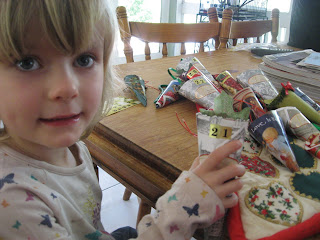 The Advent Cone Calendar under construction. The 21st is not going to be the baby's birthday!
As the Advent tree has filled with cones, I have wondered on which day my baby would arrive. I can report, it may well be on one of these days - the signs are good! There were several things I wanted to achieve before my baby arrived and I'm almost there! I wanted to have at least one Christmas baking session and try out a recipe from the December issue of NZ House and Garden magazine for white chocolate Christmas truffles. They were delicious and there are only two left in the fridge! I also made my coconut flavoured biscotti - recipe to follow! 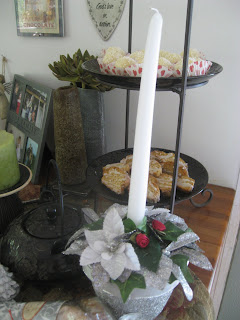 Yesterday, I also crafted. Last week I had painted two terracotta pots silver and coated them in shimmery, silver glitter in preparation for making a silver themed candle holder. The glue gun was given yet another workout as I ripped apart faux, glittery poinsettias for their silver leaves and rearranged them, adding in some silk roses and ivy. If I have time today I will make the second one! They will most likely sit on top of this cupboard - the wooden letters were painted and glittered last week. This fine glitter stuff gets everywhere and adheres to everything, even to me! I sparkled for several hours! 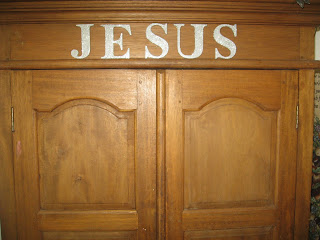 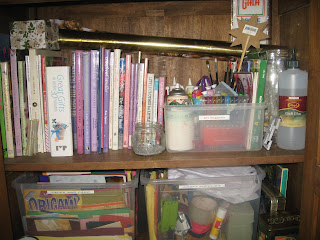 My craft cupboard did not really need reorganizing but even I was surprised at what a pregnant woman furiously nesting could achieve with some simple rearranging! I now have my children 's art supplies to hand - they used to sit on a top shelf in the office and I was tired of hauling in chairs to stand on, in order to reach them, especially when pregnant!

Notice only one roll of gold paper left. I sat up on Saturday evening, watching 'Carols in the Domain' on television, wrapping presents as I was given a preview of my baby's musical tastes. I can report the baby slept through the Wiggles but began moving fervently when Welsh soprano Katherine Jenkins began to sing and settled down again until Mark Vincent's rendition of 'You Raise Me Up' brought on leaps - of joy, I presume. My teenage son said it was a violent reaction! I don't believe that - I am going to put on my Josh Groban CD today to satisfy those classical yearnings! 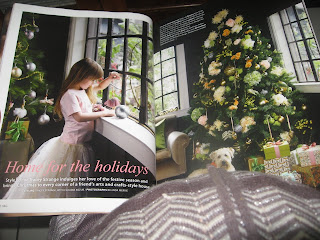 I did sit down and put my feet up and enjoy some Christmas reading as I taste tested one of the truffles. I also managed to put up a post on my favourite Christmas books and magazines at my Christmas blog. Do pop over and enjoy some of the beautiful images from books that inspire me. 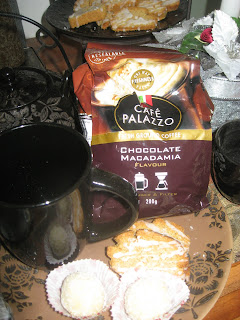 I was hoping the baby would allow me one more episode of 'Man versus Wild'. I quipped to my husband that some of the scenes were just too much and it could have been 'Woman bears Child' whilst watching 'Man versus Wild'! From the comfort of our sofa, we tucked into our pre-Christmas truffle and biscotti treats, enjoyed with a cup of our favorite coffee, viewing one drenched, ex-special forces soldier and survival expert, Bear Grylls, leap over waterfalls, ascend to the canopy of the rainforest by means of vines and tuck into termites (they are packed with protein apparently - no, I'm not going to be raiding the termite nests here to gather snacks for labour!) BTW, if you haven't found a present for the man in your life, the 'Man versus Wild' DVDs would make a great gift. I went to my local Dymocks bookstore which stocks SBS DVDs to buy one for the boys in our family but they had sold out. 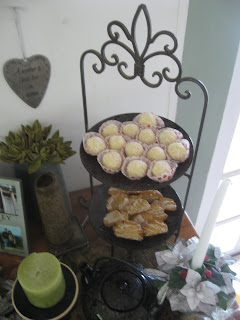 I chose not to save the truffles and biscotti for Christmas Day for several reasons. No matter how hard I try to hide baked goodies, the teenage son and husband sniff them out from several kms away. They don't even need to be baking in the oven! They would never last until Friday and as I might not be here and could possibly miss out on the fruits of my culinary labour - they were consumed last night and the last of the biscotti disappeared at morning tea time.

I will put up the biscotti recipe a little later - need to go and walk around for a very good reason. Yes, it is highly likely that I am in the early stages of labour and have been all morning, even as I typed this post!

I told you I would keep you posted! Hope you are enjoying your Christmas week preparations. It is good to know I do not have to head for the malls and all the madness- they say 46% of people leave their Christmas shopping until the last week! If you are one of them I wish you well, you are very brave and as for me, I'm just heading to the labour ward, exactly when, I do not know! Maybe my next post will be a birth announcement or a recipe for biscotti! Check back soon!

Posted by Ann at eightacresofeden at 9:37 AM

Forget the Biscotti - I'm having a baby! I think! I know I promised to deliver a biscotti recipe but let's say things are progressing and I'm waiting for my husband to arrive home from work. Ringing the hospital next and maybe going in this afternoon. Just had a few minutes reprieve, so taking the chance to ask you to pray - that's it, here comes another contraction. I'm going!

Ohhhhhh Annnnnnnnnn......You may even be home for Christmas day with your long waited for little bundle of joy!
I am welling with tears thinking of it!
I am so excited for you and will spend much of the evening In prayer.
Thinking of you.

I'm definitely praying for you. I can't believe you've done so much just days before having the baby. I've got 5 weeks to go before our 7th baby is due and have practically given up baking, although I did make my own version of white chocolate truffles today and they will be lasting until Christmas day. Have a very happy Christmas.

Dear Ann,I loved your post and you have been so industrious. The goodies you made sound delicious. I will pray for you and looking forward to hearing your news. How exciting for you and all your family. Praying for a great delivery and healthy baby. God Bless, Angela.

My dear Ann,
I have been rading some of your older posts. I love them and especially enjoyed the one about raising respectable children!
I have a few questions, though, when you are free...have a moment from childbirth and after!
What is "whingeing?"
What is Kiwi? (other than the yummy fruit?) Is it a nickname, such as our "Hoosier" for those of us who come from Indiana?
Hahaha! We don't have those words in "American English"...at least I don't think we do!

Hello Ann,I have just had a lovely time visiting your blog for the first time.Hoping that you are well and home for a happy Christmas with your family.

Oh Ann How exciting! I'm praying for you!
What a lovely post & I would love that biscotti recipe sometime....but more importantly take care & enjoy your precious babe's birth! What a lovely time to be having a baby - as we celebrate a baby born 2000 years ago!
God be with you
Renata :)
PS I'll be checking your blog regularly for any updates!

Ashley and I are waiting and praying. You are mentioned in most all our phone calls. It has to be soon. Have a very Merry Christmas. I am thankful your heat has let up!
Keep us posted!
Carrie

Ashley blogged about your gift. You need to take a look see! :)