20 Years of Marriage - 'Truly' Another Reason to Celebrate! 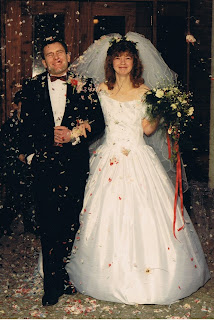 December 2009 has been the most wonderful month for celebrations at eight acres of eden. Birthdays for twins, a boy turning 10, the arrival of our seventh child in the days before Christmas, the Birth of Christ and now a Wedding Anniversary. As the year draws to a close and I am on my 'babymoon', 20 years ago I was about to go on my honeymoon! To marry during the Christmas Season was a dream of mine and it came true for me when I married the love of my life, Brett, the New Zealander who had traveled to London in England for a working holiday, not realizing that he would bring home a wife who would one day bear him 7 children! 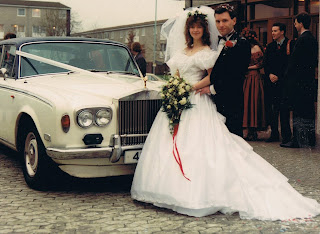 We married at the Baptist Church in North London where we first met 18 months earlier, at a Thursday evening Bible study. I had returned to London to take up my first occupational therapy position at the hospital where I had completed most of my clinical practice. I had chosen this hospital because a year prior, I had met some wonderful young people from this very Baptist church at a 'Operation Mobilization' conference.

I did not realize that God was sending me here to meet my future husband and may I add, a man of integrity who loves his family and shares with me, the same vision for multigenerational faithfulness (I have already written a tribute post entitled 'My Father's Hands' to him this year, which you can read at my archives) Just four months after our wedding day, I would leave the city life behind and move to a much greener land down under! See that gray sky, I never knew what blue sky was until I moved to New Zealand!

Brett and I were introduced at that Bible study -love at first sight? Maybe - I saw him turn to the guy sitting next to him and whisper 'Who is that?' Brett had been in London for almost a year attending the Baptist church that I had attended during my clinical placement - my friends were his friends too! Of course, all those friends attended our wedding which took place on a very chilly December day, just six months after he proposed to me during a trip to Scotland.

As it was a Christmas wedding it was so exciting for me to add seasonal details. The bridesmaids wore burgundy satin gowns, I designed the headdresses and bouquets and took the drawings to a florist. I carried a bouquet of winter white roses, holly and ivy! I wore a designer wedding gown - the only time I have ever paid full price for designer! I still have my dress which, yes, I can still fit into and I hope that, at least one of my daughters will wear it one day for their wedding! We were able to afford this extravagance with the budget we had been allocated by my dear, generous father (who now lives in Heaven) because we were careful with how we spent money on other wedding day expenses such as the reception venue, catering and flowers.

God provided wonderfully, an exquisite cake was a gift from my auntie Joan, a most talented cake decorator. Our best man hired us a Rolls Royce as a wedding car and Brett's cousin who worked in the tourist sector, booked us a 17Th century cottage in the country, for our honeymoon!

The most romantic moment of my life was when a guy from our church with a soulful, Heaven sent voice, who could sing like Lionel Ritchie sang 'Truly' at the close of our vows. I felt so honoured; he had sung to his own wife as she walked down the aisle 'You're Once, Twice, Three Times a Lady'! A few years later in the early 1990s, I heard that he had captured the hearts of the English public on a TV talent show called 'Opportunity Knocks' making it to the finals. My mum was so excited - this guy had been my wedding singer! I wish I knew where he was today. 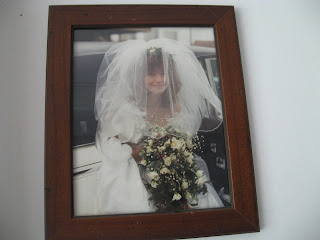 And so, last evening we celebrated as a family. I added a few romantic touches to the table and begged my daughter to make chocolate eclairs for dessert! 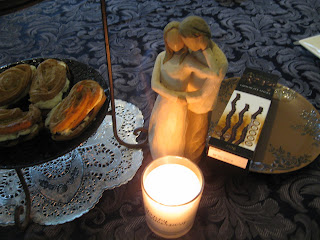 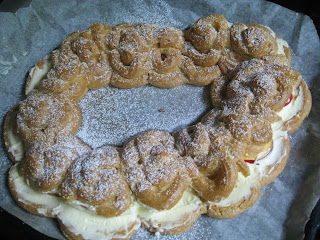 After, she produced this dessert the evening before, her first ever attempt at making choux pastry. It was melt in the mouth perfection! I will show you the book next year which is inspiring such delectable culinary creations. She is now ready to take on that profiterole tower as seen on 'Masterchef Australia'!

Next year is tomorrow! A new day, a fresh start, another year to walk with God, to seek His face and see His promises fulfilled. He has been so good to me this year. One of the answers to my prayers was friends - I was in need of friends, especially as I am a mum who stays close to home. Those friends came as a result of starting this blog in March 2009 and I am so glad I did! I have met some wonderful people in both this country and the USA through blogging and I want to take this opportunity to thank each of you who leave the kindest of comments, who offer me encouragement and allow me glimpses into your everyday life. You all cherish family as I do and that speaks to me of hope - hope for our churches, our communities and our nations! Keep holding on, keep loving those husbands and raising those precious children - they are our future! God is with you on this journey and the best is yet to come!

Posted by Ann at eightacresofeden at 3:53 PM

What a wonderful story of your wedding Ann! I too love Christmas and was thrilled to marry in December also!!
I couldn't have worded that final paragraph better myself :) I too have loved meeting like-minded kindred spirits, it has been such a blessing to me. :)
Have a great new year's night tonight. xo

Congratulations on your 20th Wedding Anniversary. Lovely to read of some of the details of your wedding.I especially liked your encouraging message at the end.Thankyou and wishing you and your family a happy and blessed New Year. Angela

congrats....My Hubby nad I have been together for 20 years and married 10 considering I am still early 30's thats amazing to me.
So to hear of another mum with littlies who too is married 20 years is heartwarming.

An it truly has been such a honour to be privledged with a seat on this ride of your life this year in blogland.
You have truly become my "Faraway and never " yet met mate too!
Happy New year...and Boy I hope one of my girls can cook like yours oneday...delicious looking morsels!

Congratulations Ann! What a month of celebrations! I was interested to hear you were also an OT - I met my husband working at a hospital in my OT grad year! God Bless and Happy 2010 xo

Congratulations and best wishes for many, many more happy years serving the Lord!

What a wonderful post! Congratulations! I didn't realise you were from good ol' blighty! :)

Congrats Ann and Happy New Year!~
I too stay close to home with my 6 kiddos....praying to get blessed again! I love my blog friends so much too. They enrich my life so much and I can stay at home and its ok if I'm still in my PJ's~
You and your family are in my prayers!

Congratulations and a very blessed New Year to you and yours!

I so enjoyed seeing your wedding photos!
What a month of celebrations you have had!
Happy New Year!
Carrie

Hey there - hope you're having a good night with your beautiful baby boy. :) Thanks for your comment- I've left you one in the follow-up comments, just thought I should let you know! :)

Congratulations on 20 years! What a lovely post & such a beautiful bride you were! You sure have had a busy month, but filled with wonderful blessings!
I'm slowly catching up on posts I've missed.