I will look after this BEAR! 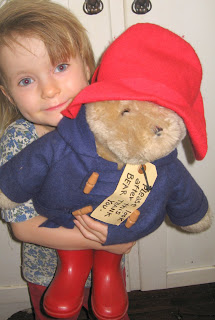 As a child growing up in England in the 1970's, I adored the stories of Paddington Bear, the very polite, lovable character from 'Darkest Peru', created by Michael Bond, who stows away on a ship bound for England and ends up on Paddington train station with his suitcase, half a jar of marmalade and the infamous label that reads 'Please look after this bear. Thank you' and is taken in by the Brown family who reside at number thirty-two Windsor Gardens, where he creates mayhem and forever changes their day to day life as a family. Paddington Bear is a true British institution! Want to teach your children about life in Britain - read to them from the Paddington books! 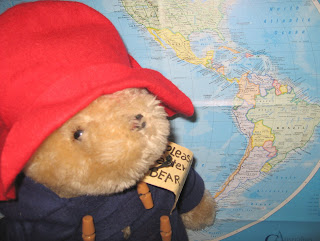 Sadly, I never owned a Paddington Bear - I longed for a proper Paddington but somehow he never joined my collection of bears, soft toys and other British 70's icons such as 'Sooty and Sweep' and my favourite 'Womble' Orinoco (I still remember the words to 'Underground, Overground Wombling Free' - for those not familiar with the Wombles - they were, well, 'Wombles', who urged children to 'Keep Britain tidy' by picking up all the litter on Wimbledon Common in London and long before 'reduce, reuse, recycle' became a catchphrase, the Wombles were 'making good use of the things left behind'! Somehow, this message eluded the kids (and most of the adults) in my neighbourhood which was always littered with cigarette butts, sweet wrappers and crisp packets.

There were no such things as 'pooper scoopers' and this is why I think my parents preferred me to play inside - my mum was tired of cleaning the soles of my shoes whenever I stepped in the offending messes left behind on the pavements by neighbourhood hounds - grass was rare, the playgrounds were concrete and broken glass scattered under the swings which were usually out of order due to vandalism, meant I was never allowed to venture inside the local recreation ground.

Was I deprived? I didn't seem to think so and played lots of imaginative games inside. I actually homeschooled my bears! My toys did not sit behind desks in rows but rather in a circle. I would read to them from Enid Blyton books and I enjoyed giving them geography lessons. I can actually remember teaching them the 5o states of the USA - something I taught myself from a book as a child -Why? I have absolutely no idea!

Who would have thought that one day I would teach my own children at home and read to them from books by Enid Blyton and another favourite from my childhood - 'Milly Molly Mandy'. 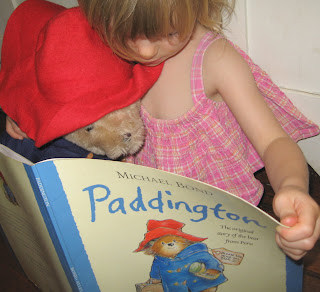 My only deprivation was not owning a Paddington and I determined that one day my children would own one for sure. Fast forward to the 1990's. I had come to live down under after meeting my kiwi husband in London and marrying there in December 1989. We will celebrate 20 years of marriage at the end of December! There were not too many Paddingtons on the shelves of the toy stores in New Zealand. A certain, purple dinosaur and those silly Teletubbies were the toys of the moment when my children were little and it was not until I made a trip to England in 2001 that I decided to look out for a Paddington for my son who was 15 months old. I found one - but I could not believe the price tag - Sixty British Pounds for a decent sized Paddington. I could not justify paying over $120 for a soft toy and reluctantly left him behind. 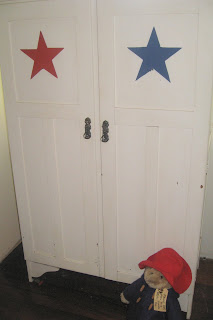 In the morning I had painted these wooden stars 'duffle coat' blue and 'gumboot' red (Paddington Bear's colours!) to disguise the pink stenciled roses on the wardrobe which is now my son's toy cupboard! I came across Paddington that very afternoon!

So after more than thirty years, my dream of owning a Paddington has been fulfilled. Where did I find him? Not on Ebay - though you will find Paddingtons for sale there. I found him on my local high street - in the front window of a shop that sells all sorts of vintage items - clothes, furniture, home wares and last week their window display was featuring vintage nursery items.
He stood propped in the corner of an old cot and the price tag read $15. I did not hesitate - I raced in and checked to see if he was genuine - yes, he was! The label confirmed that he had been made by 'Eden Toys'. When I realized he was a vintage bear from 1981, I gladly paid the asking price and brought him home to live at 'Eight Acres of Eden' - how appropriate was that maker's label? I now realize why I had to wait so long and he will be treasured and not resold on Ebay! Despite the fact that he is in mint condition, has genuine red Paddington wellington boots and the label is intact stating 'Please look after this bear -Thank you' I did not discover this until I brought him home, the label was tucked inside his duffle coat! 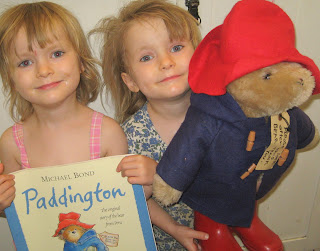 I will look after this bear! I have decided to place him under the Christmas tree - a special gift for our new baby. I could not grant joint ownership to the twins, who will likely squabble over him - they think he is adorable too. The bear I always wanted as a child will be a family bear, for this is what Paddington was - a member of a family - such a lovely reminder of my childhood and for my own children their English heritage.

Posted by Ann at eightacresofeden at 2:37 PM

I love Paddington too!
My Third child was gifted a Paddington rattle type toy with chew rings...The Tag has gone bUt he is till a fav.
I have the book and My Daughter loves it.
I though am still overwhelmed by Paddington,peter rabbit and the like...
I even got the Paddington Video story series from a Garage sale for all of $1 each.
Glad Paddington has found a home at 8 acres of eden to be Cared for:)

What a beautiful story Ann!! Some things are just worth waiting for, aren't they?! :) He is delightful.

Oh ~our God is so good to answer even the smallest of our heart's desires. I love it! This post just thrilled my soul today and brought a smile to my face.
You have a wonderful day Dear Ann~
Thoughts & Prayers~
Carrie

So cute~
What a great post~
Childhood stories are a wonderful thing aren't they!
What a fun thing for the twins.....in preparing them for the new arrival!

A lovely story, Ann. Anything that generates a good memory from the past is worth having. I have just received in the mail, the 4 seasons of ALF (purchased through Amazon). He appeared on our screens in 1986 (the year we were married) and we just loved that series. We had a good few chuckles last night as we watched some episodes.
I'm sure Paddington will be very happy living at Eight acres of Eden.

Ann, I can't tell you how much we love Paddington Bear here too! We also love Winnie-The-Pooh and Rupert. Rupert was a Brit cartoon that was on our PBS stations here when my older girls were younger. I named my St. Bernard after him:-) Thanks for the fond memories!

I always enjoyed Paddington as a child as well, but haven't thought of him for many years. I am so pleased you could finally find one & what a special treasure for your new baby! Your girls look happy there with the book & bear!
Where in England were you from? I was born in England - my parents were Aussies over there on an extended working holiday.

Yes, I am in agreement, blessed are they that learnt to read via Enid Blyton's books. This explains why I have just published a book on Enid Blyton, titled, the Famous Five:A Personal Anecdotage (www.bbotw.com).

What a great post... I was also born in England and had great fun introducing Rupert Bear, Wombles & Paddington to my children. I have all my Enid Blyton books from when I was a child and it thrills me to see my 9 year old daughter reading the famous five, secret seven etc, etc... but my absolute favourite book from child hood would have to be Milly Molly Mandy. thanks for sharing
Helen - Townsville