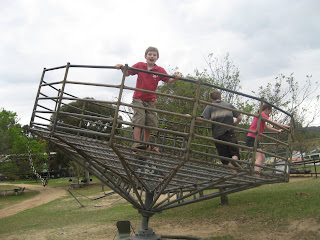 Living, Laughing and Learning was the title of the recent Diana Waring Homeschool Conference that my family attended - more on that later but it is also what we have been doing a lot of recently.
We have been living - really living just not existing or surviving but enjoying life together as a family - it has left me with little time to post on the blog but this springtime has been for me all about rediscovering the joys of an abundant family life.

Living in a small budget cabin at the camping ground which was close to the venue for the homeschool conference. Budget to me usually implies, dark, damp, rundown but these cabins were light, airy and immaculate and at only $75 a night for eight of us, very affordable.
We enjoyed barbecues and picnic lunches and some of the braver souls in the family went for a dip in the pool - it was hot but the water was cold - I just dipped in my toes!

Laughing - we spent lots of time laughing and had so much fun especially on the second day of our mini- vacation. We visited a farm park way out in the bush - about 30 kms out of the town. This is somewhat different to the average Australian theme park. It has slides and a roller coaster but everything is made from metal pipe! Totally ingenious, designed and built by one creative man many years ago and my children just had a ball! Most playgrounds these days are only designed for the littlies - councils have removed all the really fun equipment - the too high slides, the too fast roundabouts and older children such as my teenagers end up being supervisors on the sideline for their younger siblings - but not at this park! 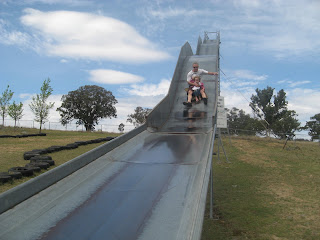 The super-high slippery dip is for over tens - my husband is over ten! 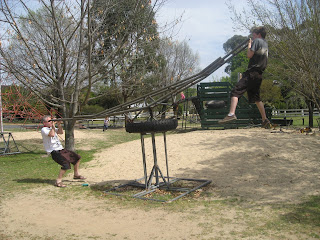 Father and son could not stay off the ground! 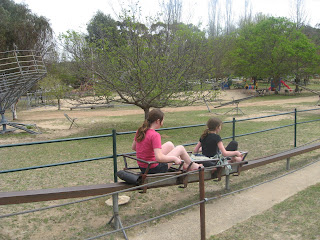 The end of the ride on the roller coaster - no seat belts required, just hold on tight! 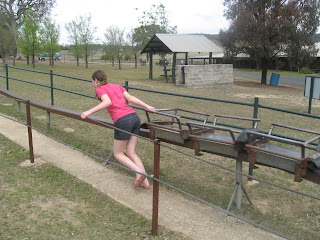 Want to ride again? You haul the carriage back yourself! 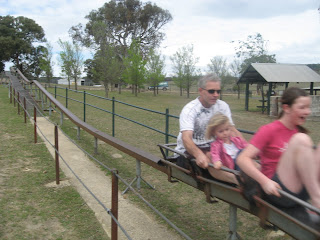 All the family went on the roller coaster except for me - I thought it might bring on labour!

There were no queues for the rides at this park, for most of the day we had the park to ourselves. It was also friendly on the family budget. Just $5 admission per person. Under 3s are free. It also has an aqua slide which you pay extra for. This is only open during the summer months, much to the disappointment of my children - they just love whizzing down water slides! 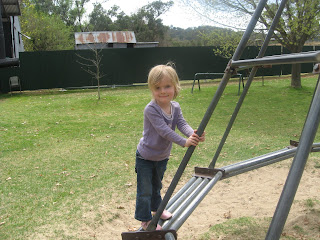 The children (and husband!) compensated for missing out on the water slide by spending extra time in the playground and trying out everything which spun, twisted, lifted, rocked or turned. The twins had a wonderful time- now this device takes me back to my childhood, we used to call it the 'witch's hat'. I have not seen one of these type of roundabout/swings in years! I even had a spin too! After wearing themselves out in the playground it was time for a more leisurely stroll around the gardens and animal enclosure. There were a variety of farm animals, Australian mammals, marsupials and birds to 'greet and meet'. 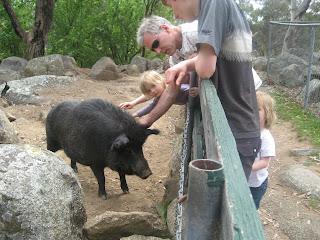 This friendly pig appreciated a scratch 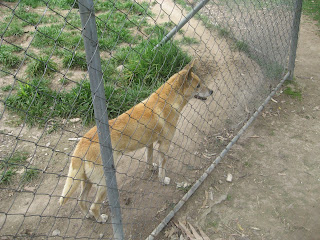 Another Aussie animal - the dingo 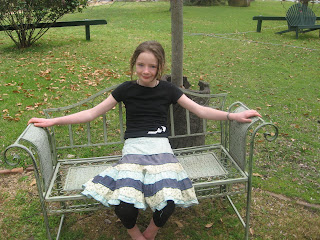 I managed to persuade one daughter to stop for a rest and a picture so I could admire the lovely wrought iron garden furniture. The rest were still being amused by animals and some had sneaked back into the playground! We have chickens and cockatiels at home but we do not have a giant jumping pillow! 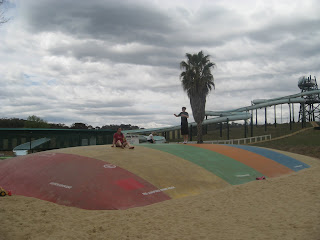 A storm was brewing, so we managed to persuade the children that we ought to have our lunch before the rain arrived which it did. We made our retreat with some reluctance and returned to the cabin to recover! Never was so much energy expended in just one day! If you are visiting the New England Tablelands of NSW and would like to visit this park you can find more details at their website www.greenvalleyfarm.com.au

Learning I have just learned that blogger can cause me so much frustration. I would love to share with you what I learned at the Diana Waring conference, in fact I just did but Blogger was not cooperating and refused to save my work, so I'll take a break, publish what it has saved thus far before I lose any more work and return tomorrow!

As postscript can I ask you to pray for my younger children who are struggling with the effects of the dust storms that blew into our state from inland NSW? We have all found ourselves 'clogging up' with hay fever like symptoms and my 9 year old son and 12 year old daughter are coughing, eyes streaming and feeling quite unwell after more gusty winds once again sent dust our way and turned our blue sky grey for the second time this week.
Many thanks!

With love and joy and watery eyes!
Ann

Posted by Ann at eightacresofeden at 10:12 AM

Ann My Prayers are with you all suffering from that awful dust!
How FUN does that farm/park look!
Fantastic!!!
Sooooooo Much fun!

Wow, what a wonderful place! Look forward to hearing about the conference and yes, I'll pray for you littlies - we too are suffering up here... :( Looking forward to clearer skies!

Oh~I will join you in prayer. I am also suffering now but it is really hay fever.

I looks like you had a wonderful time!
Autumn Blessings~
Carrie

Hi, sounds like a wonderful family getaway. I love that memories are made on these little juants. My fondest memories are from when we went on little away trips with my family.
As for the dust, Yuk. I hope the kiddos are feeling better soon.
Niki

What a fantastic place this farm and playground are. There used to be a similar type of playground at Monash in the Riverland of South Australia but according to Wikipedia, it was closed down because of the dangerous equipment (Government Fun Suckers!). It was re-opened with scaled down play equipment and more park/picnic grounds in recent years. They had one of those gyroscopey whirly things like in your pictures too. Great fun for adults and I am pretty sure noone ever really got hurt.

Nice to see a family enjoying the great outdoors and for not much cost.

Oh I hope they're all feeling better by now. That dust storm was a doozy- seemed to cover the whole state. Of course I'd just washed my windows & then with the dust & the rain that came later well they look worse than before.

That park looks fantastic - great price & lots of fun for all the family!! The cabin was great value. We stayed in one on the way back from Brissy & it cost us $130 for the night - & that was just the 6 of us (with no room to spare).