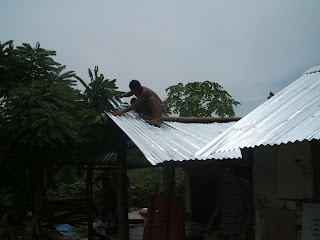 My teenage son returned from his first Missions Trip to Thailand on the weekend. He had a wonderful time! He loved everything about the place .... the people, it truly is the land of smiles! I wish I could share some of the photos he brought back of the smiling children but I want to protect their privacy.... they were not street kids but children who have found a home at the orphanage that is part of the project our church supports and sends workers to each year. These children are delightful... my son tells me they rarely whinge or whine, yet they have so little in terms of material possessions. Perhaps that is what my son noticed most... the people have so little but they are happy.

He also loved the food! Delicious, cheap to buy and big servings - just what a teenage boy demands! I'm afraid Thai cooking is not one of my culinary gifts, I might have to learn how to cook Thai now. Or there is always the Thai takeaway in town!

He loved the weather, hot and humid but bearable. Afternoon storms sweep in, bringing rain which is why my son grew wise and accepted the offer of the passenger seat in the ute they drove around in. The other boys who loved the exhilaration of riding in the back of the ute.... a popular form of transport for many locals, well... they got wet!

He loved the work which did, as the title of this post suggests, involve a lot of clambering onto thin, tin roofs. The team of five young men from our church spent time working in two different slum areas. Their main tasks were to repair existing dwellings - they removed old leaky roofs and replaced them with new sheets of iron, they completed five roofs during their stay. The first house they worked on was really more of a shelter but it did not offer much protection at all. The roof leaked and was supported by bamboo poles, it had no walls. The wind and rain would blow in during storms and as it was located on the edge of a swamp, mosquitoes were a major problem. The guys recycled the iron sheets from the old roof and used them to create walls. The raised floor which was also constructed from bamboo was half covered with flimsy sheeting. They were able to purchase new wooden sheets to replace the old flooring and cover the bamboo where no sheeting had been in place. This picture is an after shot! It truly is a home improvement when you consider that it did not have walls before the team set to work! This was the home of a mother and her young child. Can you imagine living in a room like this? Seeing these pictures helps me realize how blessed I am. It puts my own home renovation and decoration wish list into perspective! Yes, I'd love an ornate mirror for my hallway but hey, I have walls - solid, plastered, painted walls with no gaps! I am blessed. The lady who lives in this dwelling was one of the people they were able to do most for... she had the least and was the most grateful. One villager who lived in better circumstances harassed the boys and demanded that they come and fix her roof. They did but she was less appreciative. Is it a case of when we have more, we appreciate less and come to expect more? 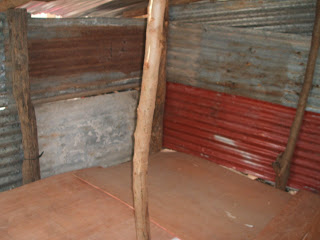 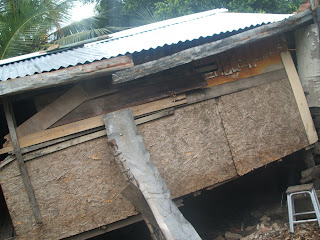 This is the final home the team worked on... a more substantial home!

The team were able to help with other projects apart from building. They went on the 'food runs' on Mondays and Fridays, delivering food to households in the nearby leper village. They participated in the running of the weekly exercise class for the people who live with this crippling disease and they handed out knitted teddy bears to children in the village, which they had taken over in their baggage. They also spent time at the orphanage, playing soccer with the children and befriending the locals. My son's extensive experience with the 'whipper snipper' was also put to good use in the orphanage grounds! 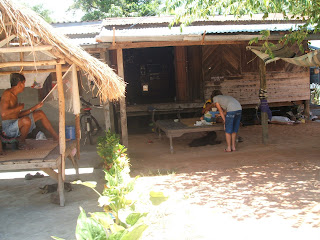 Handing out gifts at the leper village

My son is home now and he is missing Thailand. It is almost like culture shock in reverse! He wants to return soon. It is his 17th birthday next week and we asked him what he would like - his response - money to go towards another plane ticket! I know he loved the trip so much because it gave him a true sense of fulfillment. He was making a difference in the lives of others, extending his hand to the poor and putting to good use all the skills he has attained by helping build his own family home.

Some of the young people who have been sent out on these trips from our church, return of their own accord to do further missions work. They come home to spend time with their families and work, stacking shelves in the local supermarket to raise money to fund another trip. Young men who are not traveling to Asia to go surfing and partying, they are not staying in resorts and spending time chatting up girls at the beach but working in slum areas, visiting the rubbish heaps where the poorest of the poor live and forage, reaching out and helping in whatever way they can. And fulfilling the Great Commission, sharing the Gospel in both word and deed, letting the light of their Lord shine before men, so that they may see their good works and glorify their Father in heaven. (Matt 5v16). They are the type of young men who I hoped my son would follow after. And it seems likely now, that he will. I'm happy for him to do this... I set out to raise missions minded children who would grow up to be missions minded adults. It may involve more trips in the future to airports to bid farewell. The next trip may be a longer one and I am prepared for that. He has returned with a new vision and it is one this mother is thrilled to support. 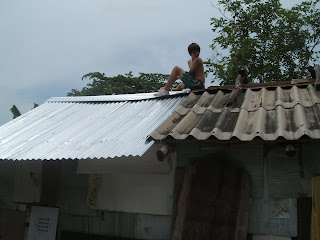 And just remember, next time you are in the local supermarket and see a young man stacking shelves, please do not look down upon him or assume it is the only job he was qualified for. He may be working for a greater purpose! If you live in the country and have to wait in your car for the young man on the quadbike, moving the herd of cows across the road, the same applies and please be patient as you wait, smile and wave. You never know what his reason might be for working this job... it could be his means of paying for his university education and perhaps another plane fare to go and work on a Thai tin roof! 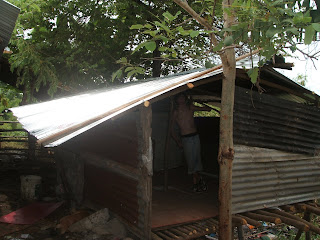 'They desired only that we should remember the poor, the very thing which I also was eager to do' From Paul's letter to the Galatians Chapter 2 verse 10.

Posted by Ann at eightacresofeden at 3:23 PM

Email ThisBlogThis!Share to TwitterShare to FacebookShare to Pinterest
Labels: The Missions minded Family

What a wonderful experience for your son!! :) I too hope to raise missions-minded children. Saraya has already decided she wants to work in an orphanage- she just adores babies and wants to go cuddle them! Me too. :) We'll see where the Lord leads her.

How proud you must be Anne...
Just totally awe inspiring and To think the Young teach the old.
The story of your Sons acheivement and Giving is one Of Inspiration and Moving!
If I win Tatts I will pay for his next ticket!
I do not buy Tatts But I get given a ticket every birthday,and that is next Month!

Anne~
What a fine boy you have. I pray God will use him in a great and mighty way!
Thank you for letting us see the photos!
Carrie

He's a fine young man! And I mean man; there are plenty of overgrown boys in this world. I hear they eat fried bugs in Thailand; did he try them?

And those who see shelf-stackers or jackaroos as inferior -- shame on them. See James Chapter 2!

Hi Ann, just over from Rhonda's Down To Earth blog after you mentioned this post.
'These children are delightful... my son tells me they rarely whinge or whine, yet they have so little in terms of material possessions. Perhaps that is what my son noticed most... the people have so little but they are happy.' - Amazing isn't it, when we compare lifestyles. I was also amazed at the lady who just wanted walls for her home to keep out the rain. You must feel extra proud of your son going there to help.

Just wanted to say how encouraged I am to read your posts. I have struggled with homeschooling my 13 1/2 yr old son. So just reading how well your son is doing/has done is inspiring to me. I also gave the book "Do the Hard Thing" to my son. It is great. Angela

I love reading blogs that are unafraid to talk about CHRIST. Thanks for sharing how your children are sharing, in word and deed, the love of our Savior!