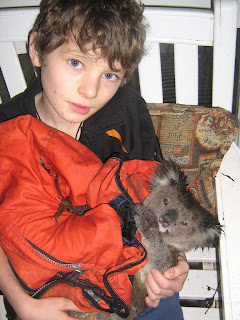 I never imagined that one day, one of my children would have the privilege of holding a koala in their arms here at Eight Acres of Eden but in December last year, that is exactly what happened and it is an experience I am sure, my 9 year old animal loving son will never forget!

My husband had just left for work when he called to say that a branch had come down across part of the road and he was not sure but he thought he saw a grey bundle in the foliage and wondered if it could be a koala. Our road is a narrow winding rural road and it is not safe to stop a car along this section; I said we would go down and investigate.

My older children were still at work, milking the cows on the next door dairy farm so I called upon my 9 year old boy ... 'Dad thinks there may be a koala on the road, do you want to come down with me and see?' ..... I have never seen him move so fast!
We trekked on down to the road and around the first bend, a branch that had broken clean off a gum tree on our property was lying across the tar seal and there still sitting on the branch was one very stunned, young koala! You would be stunned too, if you were asleep in your tree house and it came crashing to the ground! He didn't appear to be injured but didn't move when we approached him, he just blinked and looked at us, as if to say 'About time someone showed up to rescue me!'
It was imperative that we move him off the road and it was a blessing that no traffic had come around the bend on that side of the road yet, as he would have surely been bowled by the next car or worse the school bus which was due to come by. My quick thinking son took off his jacket and wrapped it around his hands; he knows koalas have very sharp claws. He carefully picked up the koala from behind which startled the koala for a moment as he started to squeal. We then tried to persuade him to go up the bank, this probably looked quite hilarious but there were no onlookers to see. Every time we shoved him up the bank the poor little guy came sliding back down! The bank was wet and slippery and his claws, so well designed to scale the trunk of a gum tree, didn't have a 4 wheel drive attachment for muddy banks!

We decided to bring him back up to the house and find a suitable tree on the same side of the property to send him up. I also thought to ring 'Wires' the wildlife rescue service, just to check that we were doing the right thing, he didn't appear injured but was possibly in shock. The lady asked if he had any external injuries and if his eyes were clear (they were) and told me it would be fine to find him a nice gum tree, place him at the bottom and watch to see that he did go up. There was time to grab the camera and take a photograph of my son who was relishing the experience of cuddling the koala. In fact, the koala was relishing his rescue, he was so relaxed that he was starting to doze off in my son's arms! I thought he looked decidedly content, even happy! You can see the look of contentment on his face in the photograph.

It was now time to release him back into the wild. We only needed to go a short distance from the house, up the back track. My son placed him down on the ground and he soon emerged from the jacket, turned his head, saw the gum tree and thought 'That will do nicely!' 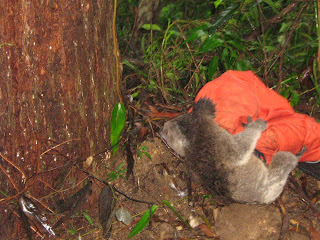 He was soon climbing up the tree, we watched him scale the trunk, displaying his awesome agility and eventually he disappeared into the branches at the top, to find himself a nice bough in which to sleep and forget his rude awakening. 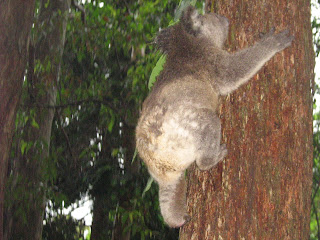 My son remained on cloud nine for the rest of the day, or should I say the rest of the week and couldn't wait to tell his older brother and sister on their return from work, of how he had carried out his first successful koala rescue. I think he is secretly wishing for more koalas to fall out of trees but for now he will have to be content with nursing back to health, the birds that sometimes fly into our windows. I've just cleaned the windows, so it's just a matter of time before I will need to call on my resident wildlife rescue officer.

With love and joy,
Ann

Posted by Ann at eightacresofeden at 2:15 PM

Email ThisBlogThis!Share to TwitterShare to FacebookShare to Pinterest
Labels: nature, our forest home